Remy Jungerman on ISCP, the Williamsburg Bridge, and the Upcoming Venice Biennale

Dutch Culture USA met Remy Jungerman in his studio to talk about his residency at ISCP, his New York inspiration, and the upcoming Venice Biennale

“I’m searching for a new language in my art.”

Remy Jungerman started making art relatively late, first studying Mechanical Engineering and working in the business sector for several years before going to art school at the age of 24. Now currently based in Brooklyn, NY, Jungerman’s career as a visual artist has earned him a one-year art residency at the International Studio & Curatorial Program (ISCP) supported by the Mondriaan Fund.

This is not his first time in New York City, as Jungerman has visited regularly for the past few years and built a vast network in the art scene. Jungerman’s previous residency took place at the Hudson Valley Center for Contemporary Art during the winter of 2017, which resulted in a solo exhibition “Between I & Thou”. Dutch Culture USA met Remy Jungerman in his studio to talk about his residency at ISCP, his New York inspiration, and the upcoming Venice Biennale.

Jungerman attended the Academy for Arts and Cultural Education in Paramaribo, Suriname, in the 80’s before relocating to Amsterdam in 1990 to study at the Gerrit Rietveld Academy. Jungerman has been working as an artist for over twenty years, and has exhibited his work in major art museums, including Brooklyn Museum, NY; Prospect.3, New Orléans Triennale; Gemeentemuseum Den Haag, NL; and Stedelijk Museum Amsterdam, NL. Jungerman remarks, “Looking back at my career, I think it’s gone slow but steady”.

Based on his own experience, Remy Jungerman centers his work on global citizenship in today’s society. He combines references to the modernism of De Stijl with patterns from the Maroons of Suriname and with rituals from the Winti religion. The two worlds in which Jungerman was raised find a way to meet in his art. “Being part of different realities, I kind of realize that I do not fit in either of them, because both worlds do not have enough to feed my curiosity”. Jungerman says that he laments the lack of historical recordings of the Dutch shared past with Suriname and that he notices these gaps, especially in art history. “That space is where I think a lot can happen, so I’m searching in that area”.

Jungerman chose to apply for ISCP because he thought the residency would fit perfectly into his profession and would contribute to the development of his art. The program also provides the opportunity to be in a different place and to collaborate with an international group of artists.

Jungerman remarks that his inspiration in New York is different from Amsterdam or somewhere else, and he recently realized he unintentionally based one of his artworks on the Williamsburg Bridge. “I was working on this piece when I went walking across the Williamsburg bridge. At a certain point I stopped and realized: wow, this rhythm of the train tracks, it influenced me in my work”.

Jungerman says that he is quite disciplined in his practice and tries to be in his studio as much as possible. He prefers working during the day instead of at night, because he likes the energy of the day and he hates to make rapid decisions in his work. “I prefer to take decisions on a daily basis, little by little, and then the work sort of like becomes,” says Jungerman. 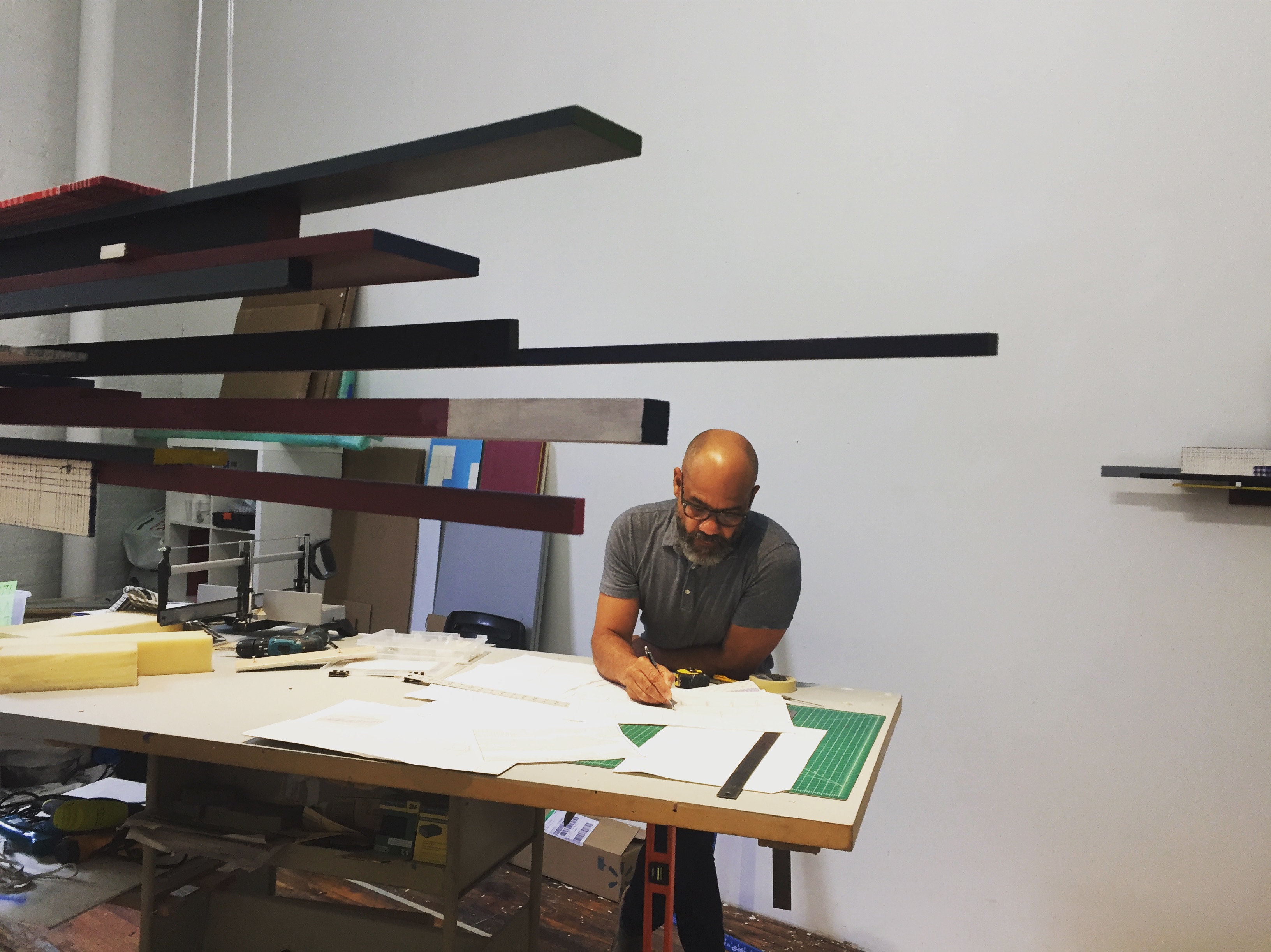 Remy Jungerman is currently preparing for his show at the Venice Biennale next year in May. He will be representing the Netherlands together with Iris Kensmil at the Dutch pavilion. The director of the Gemeentemuseum Den Haag, Benno Tempel, was appointed curator of the Dutch pavilion. Jungerman clarifies that he and Kensmil will not be collaborating, but that the works will definitely relate to each other. Jungerman: “We’re going to build an experience, so it’s not a solo show, and we aim to make the works in dialogue with one another”.

Take a look at ISCP’s mix of international contemporary art (including Remy Jungerman’s artworks) on November 9th and 10th during Fall Open Studios.