On Friday November 21st, the New York No Limits Film Series screens Silent Ones, directed and written by Ricky Rijneke.

On Friday, November 21st, the New York No Limits Film Series will screen the feature film Silent Ones, directed and written by Ricky Rijneke from the Netherlands.  The screening will take place at 7pm at The Wild Project, 195 E. 3rd St., New York. RSVP’ing is required by sending an email to jigibli@gmail.com, with your name and number of tickets (only a limited number of seats are available).

Silent Ones by Ricky Rijneke, is a film about a young Hungarian woman (Orsi Tóth) who wakes up inside a crashed car in the middle of nowhere, not knowing where her brother Isti is. He has vanished without a trace. Upset and alone without saying a word, Csilla leaves aboard a cargo ship heading to Western Europe to keep a promise she made to him. When Gábor (Roland Rába), a self-proclaimed business man assaults her and takes her last souvenir of Isti, Csilla loses grip on her life completely. The journey turns into a surreal trip on the fragile edge of life and death. 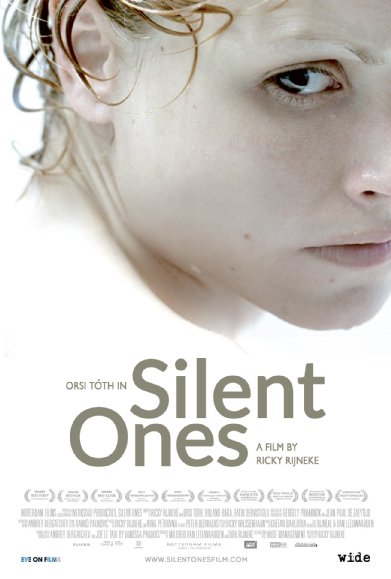 The project was presented at the Cinemart, the co-production market of the International Film Festival Rotterdam, and the Paris Project Screenings at the Paris Cinema International Film Festival. Silent Ones is part of the Imagination competition organised by the Netherlands Film Fund and the Mondriaan Foundation, which provides funds for the visual arts.
French sales agent WIDE Management picked up international sales of Silent Ones. Dutch art-house distributor Contact Film will release the film in the Benelux. Silent Ones is selected for the Eye on Film (EoF) Label, developed by Wide with the support of the MEDIA Mundus program. The Eye on Films project aims to promote debut films, enhance cinematographic diversity, and highlight emerging authors.

Ricky Rijneke graduated as Master of Arts in European Media with honors. She is a film director who also works as scriptwriter and editor and occasionally producer.

Ricky Rijneke first short work of fiction Wing, the fish that talked back was nominated for the “Golden Pardino – Leopards of Tomorrow” for young talent and premiered at the Locarno International Film Festival. This award winning film gained international acclaim at more then fifty international film festivals. The film is distributed in the Netherlands by EYE. Elypse Short Film Distribution (Spain) represents the world sales. For SILENT ONES Ricky cooperated with European talent such as Berlinale’s shooting star Orsi Tóth, cinematographers Gergely Pohárnok, who lensed György Pálfi’s ‘Hukkle’, ‘Taxidermia’ and Jean-Paul de Zaeytijd, the regular DOP of all Bouli Lanners films. Andrey Dergachev (composer of The Return, The Banishment and Leviathan by Andrey Zvjagintsev) designed the soundscape and composed the music. Actress and singer-songwriter Vanessa Paradis contributed with her famous song ‘Joe Le Taxi’.