‘ROCCO’, directed by Emio Greco and Pieter C. Scholten, comes to the USA 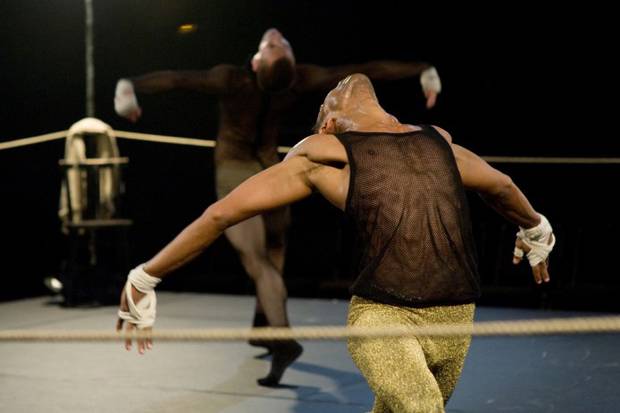 Choreographer Emio Greco and director Pieter Scholten have created their most memorable dance-theater work to date that literally brings you into the boxing ring. Inspired by Luchino Visconti’s classic film ‘Rocco and His Brothers’, ROCCO creates a theatrical environment where dancers become boxers, and boxers become dancers. The theme is brotherhood in all its Biblical, historical, and literary meanings: Cain and Abel, good and evil, angel and devil. You will actually have the option of sitting ringside on stage.

Every move in this performance is the result of a choice; with a particular movement, the dancer isn’t just creating a form, but also adopting a position.

The physical and psychological extremes of boxer and dancer. A dark full ride.

Since 1995 Emio Greco and Pieter C. Scholten have worked together in their joint search for new dance forms. Emio Greco (IT) received his dance education at the Centre de Danse International Rosella Hightower in Cannes, and danced with the Ballet Antibes Cote d’Azur. From 1993 until 1996 Greco danced in works by visual artist and director Jan Fabre and from 1996 until 1998 he collaborated with Japanese choreographer Saburo Teshigawara in various productions. Pieter C. Scholten (NL) studied drama and initially directed theatre productions about historical characters like Oscar Wilde, Yukio Mishima and Pier Paolo Pasolini. He worked with several choreographers as a dance-dramaturge. In 1995 he developed the Dance Instants, short “work-in-progress” projects for choreographers and dancers.For both artists the search for a new dramaturgy of the body is an important motivating factor.