Cultural identity and memories of her native country play a central role in the paintings, watercolors and drawings of Natalia Ossef. Based on found photographs and old postcards she reshapes a past in an abstracted figuration in light pastel tones where faces and identity disappear. Distancing herself from her background and its values, she reshapes memories by adding a new and recognizable identity to old pictures. 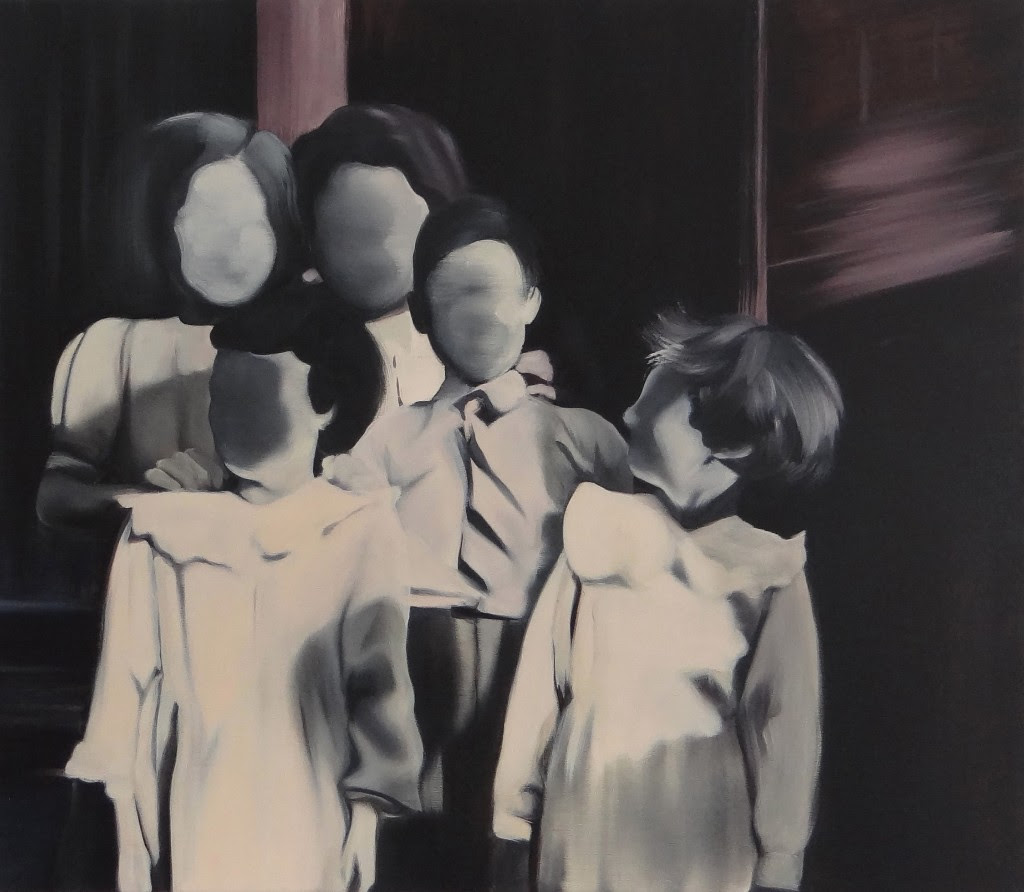 Ossef’s paintings seem like family-portraits without detailed facial features in which we can project memories of our own. Each work in the exhibition can be read as a chapter in a travel story that pull certain places and moments from oblivion.

The key motif in Inna Levinson’s work is that of desire. Desire can drive people to great things, but it can also cause destruction. At VOLTA, new works are on display presenting Levinson’s version of classical scenes in European art. Taking already existing images, Levinson recreates her own world. There are scenes of people gathering in celebration, but also of war and suffering. The works also depict mythological figures, and her own interpretations of religious tales. 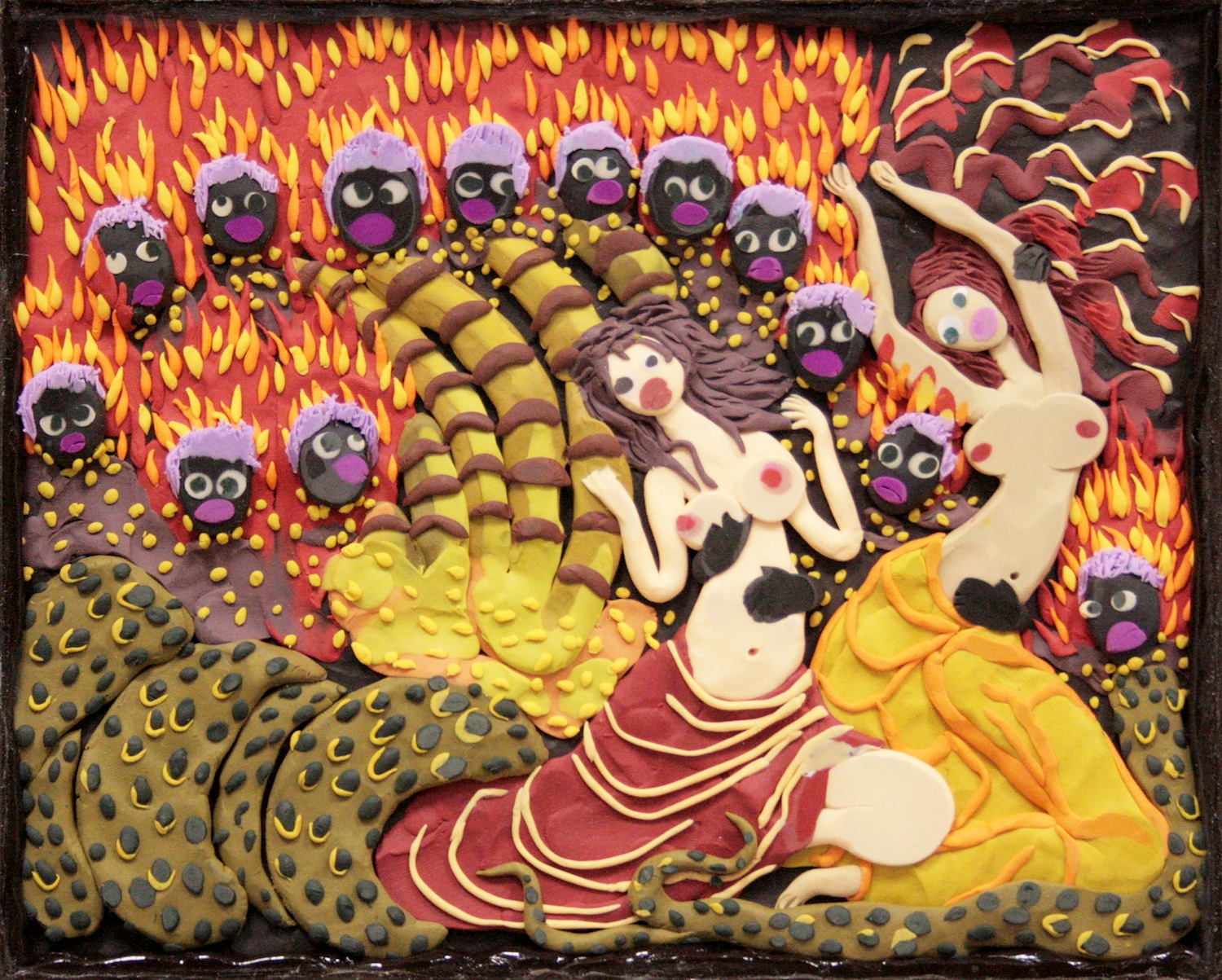 Levinson also undertakes more contemporary subjects, such as the refugee crisis in Europe. The work “Clubbing Divas”, which is depicted above, depicts European women celebrating, surrounded by immigrants, and the conflict involved. Giving an impression of religious icons, Levinson produces these works with old window frames, from which minutious clay scenes are constructed in beautiful colors. Humor is evident throughout the series; even her war scenes are more of comedy than suffering.

Koen Delaere paints with a colourful palette, with the paint itself forcing a physical and geometric path on his highly textured canvases. The flat surface is constantly challenged by the repetition of these layers of colour matter, as new paint hides the previous arrangement of colour and shape. His works thus enclose the power of time, that continually creates and destroys. 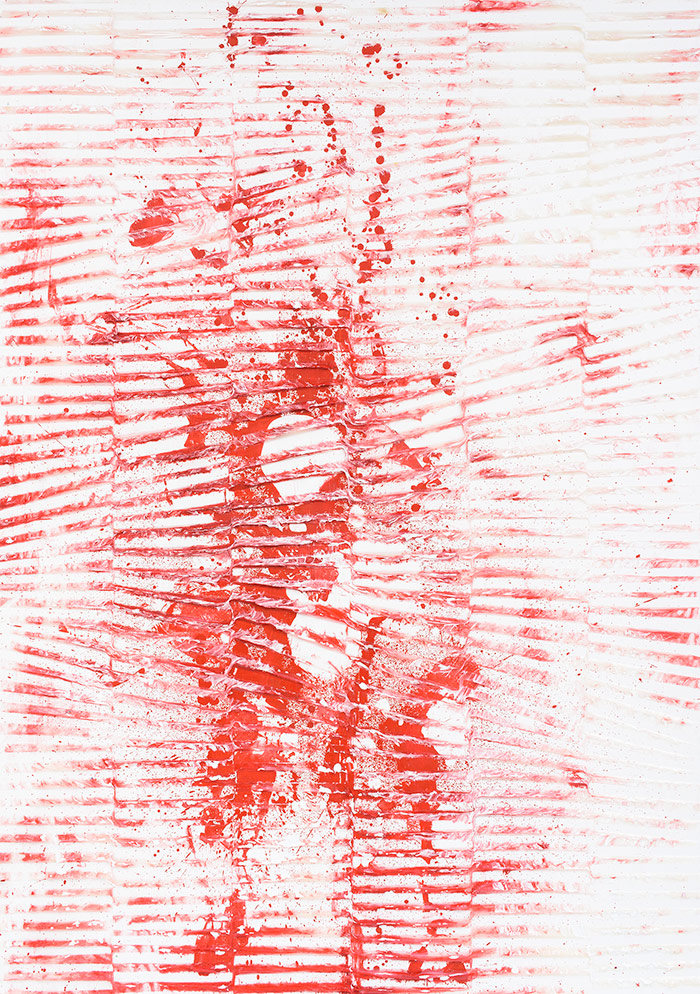 Delaere often uses a method that portrays mirrored surfaces of the pieces at the time a painting is created. Work is reflected one against the other, creating a shared dynamic signifying this change over time. The results are lively and rebellious explosions of form and alteration, that despite this always achieve harmony.

Rutger Brandt Gallery’s mission is to showcase contemporary art by emerging young artists as well as established international artists in a multi-generational program. One of the connecting factors is socially committed and narrative art to be found in various disciplines. According to the gallery, political, social actuality and individualism are key ingredients to reflect the spirit of this age.

Ten Haaf Projects is an art gallery located in the center of Amsterdam. They focus on the work of promising contemporary artists, as well on the work of modern masters. The gallery shows, represents and supports the work of a diverse group of artists. Their mission is to be a platform for challenging national and international artists.

Gerhard Hofland was founded in the autumn of 2000. Since then, it has participated in numerous art fairs as well as organizing exhibitions in collaboration with other locations and museums worldwide. Gerhard Hofland gallery is dedicated to emerging and mid-career artists striving for museum recognition and wider reputation. All their artists have a strong, outspoken formal language in their work.

VOLTA NY is the invitational fair of solo artist projects and is the American incarnation of the original Basel VOLTA show, which was founded in 2005 by three art dealers as a fair “by galleries, for galleries.” VOLTA showcases relevant contemporary art positions from emerging international artists, from cutting-edge trendsetters to next year’s rising stars. Coupled with its approachable solo-booth format, the VOLTA team has created a fair that is both accessible to younger art-lovers and beloved by seasoned collectors alike.