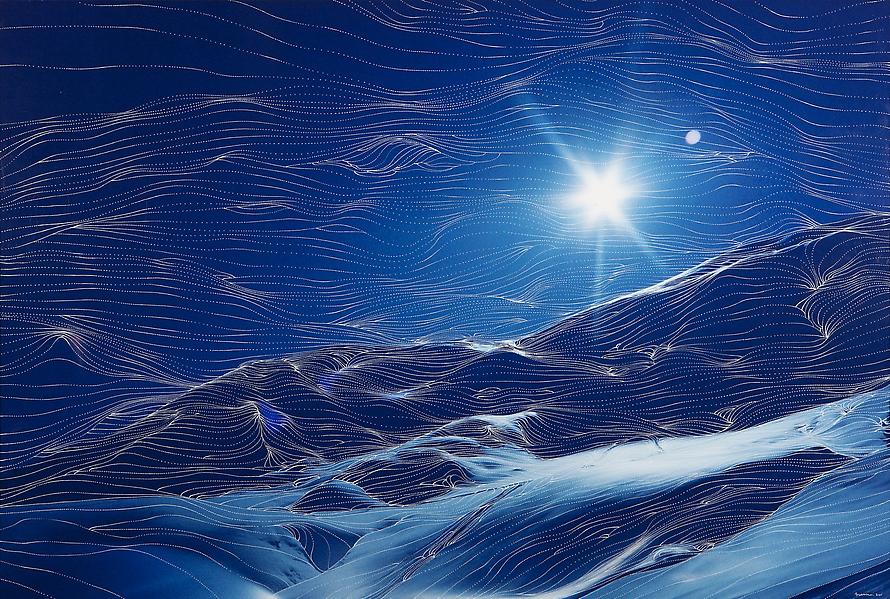 Utilizing the artist’s signature style of obsessively applied dots of paint to a photographic surface, and adding etching to his working method, Bremer renders the subjects of this series in a dream-like haze of abstraction. Drawing from Surrealism, Modernism, and Cubism, the artist collages photographs and paintings together to create a seductive labyrinth of entangled bodies and art.

In the work illustrated here, “La Dame Combinée Carrée, 2013,” Bremer co-mingles paintings by Picasso and Matisse, in a twisted form of time travel that inserts his own style and inhabits the studios and canvases of artists working before him. Bremer recently remarked on this series:

I knew that this form of mark-making wasn’t invented by me and that these obsessions and desires were not unique to me. Looking further, to see how so many artists have been obsessing about the same ideas, and wrestling with the same problem of how to carve one’s place in time, gave me a feeling of going home. At some point I thought to work directly on the art of my predecessors, to follow their carving, their lines, and replace them, rejuvenate them, re-form them. I collaged some together, changed their orientation, overlaid and blended them with other images. I don’t dream that I could ever improve them, but I was intrigued by the possibilities of blowing fresh air into them, shifting and reanimating them for a new run. To layer Picasso, who changed styles at the same pace as he changed muses and loves and passions, on top of his greatest competitor, Matisse, along with works by Brandt and Brassaï— this mix of histories and desires and ways of looking feels right to me.

Sebastiaan Bremer lives and works in New York. He studied at the Vrije Academie, The Hague, and Skowhegan School of Art and Sculpture, Maine. He has published two major catalogs: Monkey Brain (2003), and Avila (2006) and his newest monograph is due to be released in late 2013. His work is included in the collections of the Museum of Modern Art, New York, and the Victoria and Albert Museum, London among many others.

All images courtesy of the artist and Edwynn Houk Gallery, New York