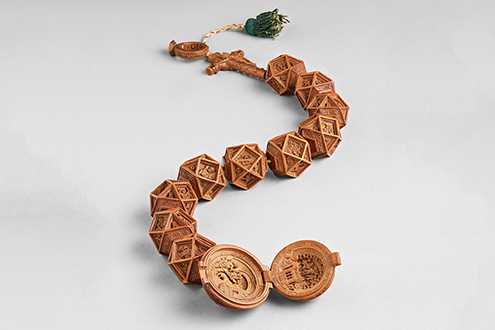 From February 22 - May 21, you can see Dutch miniature boxwood carvings from the 16th century

Small in scale, yet teeming with life, miniature boxwood carvings have been a source of wonder since their creation in the Netherlands in the 16th century. On these intricately carved objects—some measuring a mere two inches (five centimeters) in diameter—the miracles and drama of the Bible unfold on a tiny stage. The execution of these prayer beads and diminutive altarpieces seems almost as miraculous as the stories they tell and, in this first exhibition of its kind, the wizardry of the carvers who created these precious panoramas is revealed. Beginning February 22, nearly 50 of these tiny treasures will be featured in the exhibition Small Wonders: Gothic Boxwood Miniatures at The Met Cloisters, the branch of The Metropolitan Museum of Art dedicated to medieval art and architecture. The exhibition will run through May 21, 2017.

The exhibition is made possible by the Michel David-Weill Fund, and is organized by The Metropolitan Museum of Art, New York; the Art Gallery of Ontario, Toronto; and the Rijksmuseum, Amsterdam.

Visitors wishing to experience the meditative magic of these prayer beads may reserve virtual reality headsets on-site for five-minute periods, Friday through Monday, February 24–27, in The Cloisters’ Fuentidueña Chapel (Gallery #2). This limited-run offering simulates travel through and around one of the “small wonders”—specifically, “Last Judgement: Coronation of the Virgin.”

Among the highlights of the exhibition is a complete carved boxwood rosary made for King Henry VIII of England and his first wife, Katherine of Aragon, before his notorious efforts to dissolve the marriage and his break from the Catholic Church. Equally remarkable is a diminutive sculpture, in the shape of the letter P, that opens to reveal scenes of the legend of Saint Philip. This newly discovered treasure has recently been acquired by The Met.

Used in prayer and meditation, such ingenious carvings enable access to a sacred realm. Among the images are: stories from the life of Jesus; of saintly men and women; and events from Hebrew Scripture embraced by Christians as part of their own narrative—from the Biblical King David to the Queen of Sheba.

The artists’ techniques for creating these delicate works have defied comprehension for centuries, but now, through collaborative study by conservators at The Met and the Art Gallery of Ontario, their secrets have at last been unraveled. The conservators’ findings will be presented in the exhibition through video documentation and the display of a disassembled prayer bead.

Beloved in gardens across the world today, boxwood is a slow-growing evergreen, native to the Mediterranean region. In the Middle Ages, it was linked by biblical authority to the Holy Land. Dense and fine-grained, it is ideally suited to precision carving. Early illustrated botanical texts elucidating the medieval understanding of this valuable wood will also be on view in the exhibition. Plantings of boxwood in the gardens of The Met Cloisters will deepen appreciation for the artists’ extraordinary work in transforming the material from plant specimen to precious possessions.