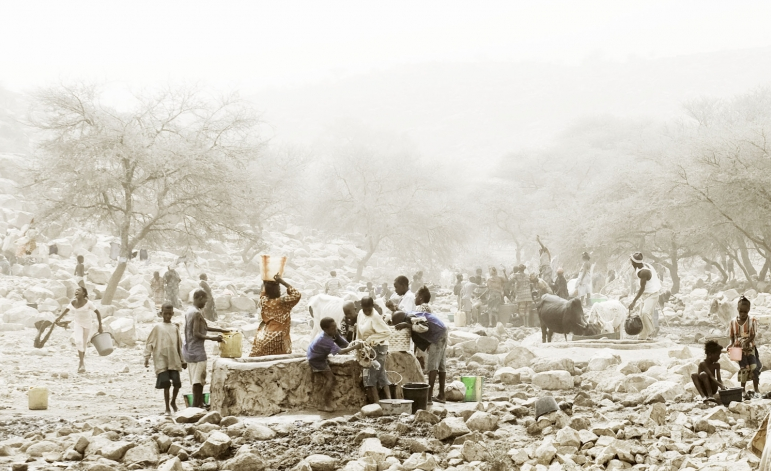 M.I.A Gallery is pleased to present “Translations,” the first solo exhibition in the U.S dedicated to photographer Sofie Knijff. The show will open on November 7 and last until December 14, 2013. There will be a reception, with the artist in attendance on Friday, November 8th between 6-8pm.

Over many years, Sofie travelled to South Africa, India, Mali, Brazil, Iceland and Greenland. During every one of her trips, she focuses on children and creates a safe environment to capture their portraits. Under the name ‘Translations’ she presents those portraits, and draws attention to the way children are when they are isolated from their daily influences and free to articulate their own characters and expressions.

Featuring a dozen of photographs, the exhibition will juxtapose two literally opposite environments: Greenland, in the village of Kulusuk, where children experience the effect of rapid climate change and Mali, in desert areas focusing on Touareg children. Both areas are remote and in both places children live in small communities where old traditions play an important part and in which life is mostly about surviving. Sofie Knijff acts as a director, setting the Stage, and leaving costumes and behaviors up to the children.

Using similar back drops to create intimacy, the children are isolated them from these surroundings and can focus on their inner world. Children go into their dreams and dress up in their ideal futures as Journalist, Hunters, Shopkeepers, Teachers or Students. Even if the children are different, the dreams are certainly a function of those surrounding communities and the environment in which they grow up. Malian children want to become Doctors or marabout, they want to do good for society as the country still has one of the largest infant death rates in the world.

‘In my work I offer an interpretation, an illustration, and I try, in a particular manner, to break out of these patterns. Therefore I approach spaces as scenery and people as characters, leading to an image-language that is frequently an attempt to give form to this other dimension’.

Born in Vilvoorde (Belgium), Sofie Knijft graduated from Fotoacdemie in Amsterdam after a career in the theatre world. She lives and works in Amsterdam. Since 2006, her work has been exhibited in the Netherlands, UK,  Italy and Spain. Sofie Knijff won the FOTO8 People’s Choice Award in 2009 and was nominated for the Harry Pennings Prize in 2011.