At 6:01pm on November 6, after the exhibition closes, P! will launch Three Times in Blue and Yellow, a screensaver designed by Karel Martens, programmed and published by O-R-G. Based on a kinetic wall clock of the same name created for the exhibition, the screensaver software uses three blue and yellow rotating disks to display the hours, minutes, and seconds of the current time. While the disks turn, the passing of time produces a collection of graphic arrangements as so many discrete moments. When the exhibition shuts down, the screensaver launches and will remain spinning indefinitely.

Martens’ work emerges from a set of seemingly disparate concerns. An interest in precision and process accompanies sheer aesthetic intuition and the beauty of chance;  his focus on the permanence of printing exists side-by-side with a fascination for clocks and the ephemeral passing of moments. In all of this, Martens aspires to something that may seem unfashionable today: to create timeless, abstract works, expressions of his continuous exploration and formal invention.

Building upon Martens’ early kinetic work of the 1960s, a new clock sculpture—composed of three multi-colored disks that rotate according to hours, minutes, and seconds— transforms the flow of time into a phenomena of form and color. In contrast, a grid of letterpress monoprints from the past year displays Martens’ intimate engagement with paper and ink. Overprinted with as many as ten layers on found administrative cards, these unique prints produce surprising and complex visual effects.
Presented at P! in a wall-scale installation, Martens’ conceptual wallpaper system stems from his investigations into printing technology and permutational systems. Offset-printed A4 sheets featuring stripes of varying thickness, rendered in different colors, function as analog pixels in a do-it-yourself graphic kit. The show’s final work is an interactive video application that translates the camera’s vision into a custom pattern language. Viewers control the scale and density of the pattern, reflecting Martens’ interest in the open-ended and ongoing process of image-making. 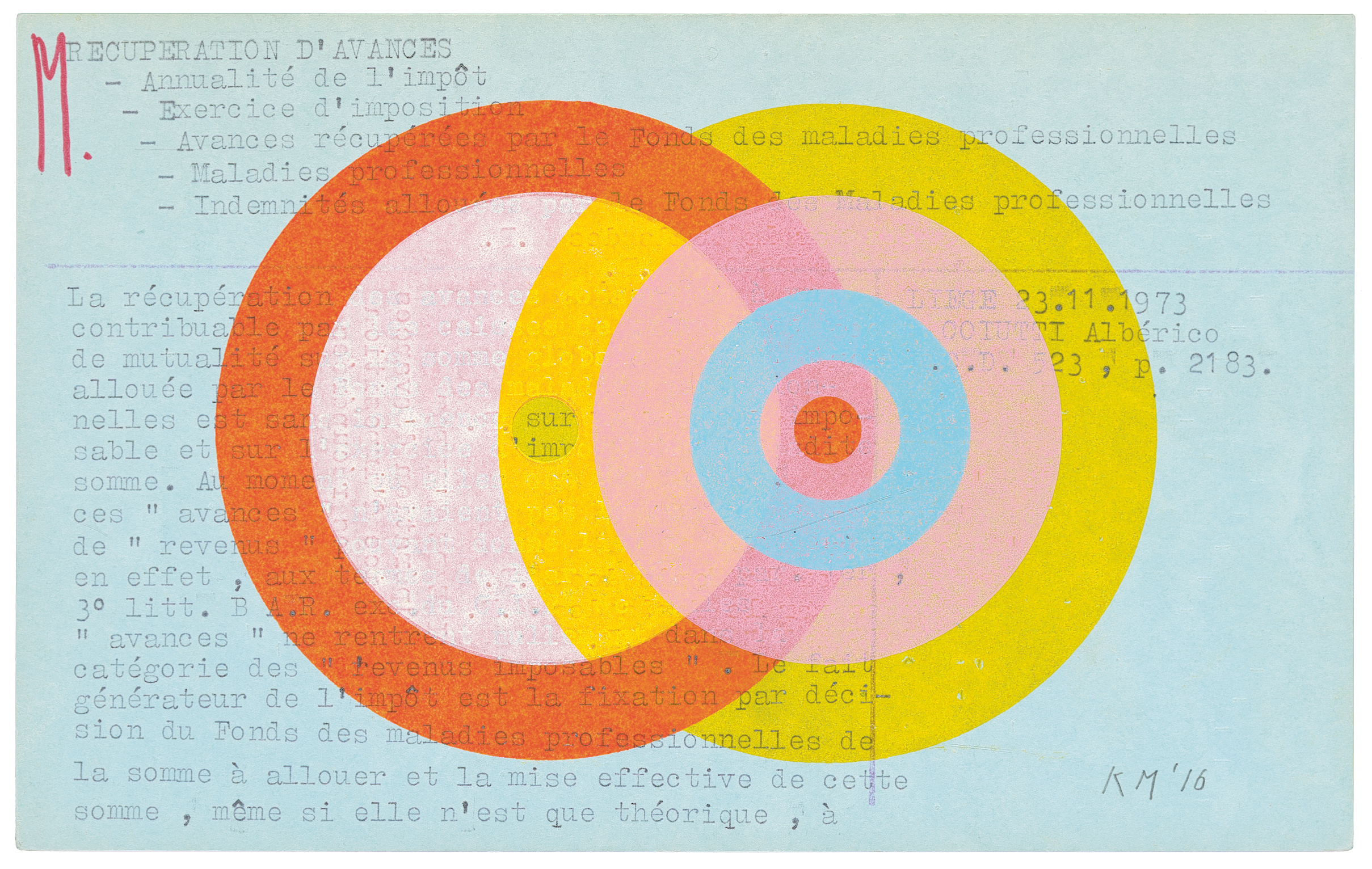 When Karel Martens began studying art in Holland in the late 1950s, “graphic design” did not even exist as its own course of study. Today, he is widely recognized as one of the most important practitioners of that very discipline, with an esteemed client list that includes major publishers, architects, and institutions. His accolades include the H.N. werkman Prize (1993) for the design of the architectural journal oase, the Dr A.H. Heineken Prize for Art (1996), the gold Medal at the Leipzig Book fair (1998), and numerous other distinctions. Martens’ unwavering experimentation with printing processes, graphic form, and the construction of typographic meaning over the past half century has indelibly imprinted a younger generation of designers, as has his teaching at the Yale School of Art, Jan van Eyck Academie, and co-founding of the Werkplaats Typografie in 1997.

Since his first presentation at P! in 2012, Martens’ work has been published in Artforum, the New Yorker, Art in America, the Observer, Design Observer, and others. He is included in the collections of institutions such as the walker Art Center, Minneapolis; Museum of Modern Art Library and Archives, New York; Cooper Hewitt, Smithsonian Design Museum; and the Art Institute of Chicago. In 2017, he will present a solo exhibition at the Kunstverein Munich, Germany, and premiere a large-scale public installation in Le Havre, France.