Spirit of Cobra exhibition at Museum of Art | Fort Lauderdale 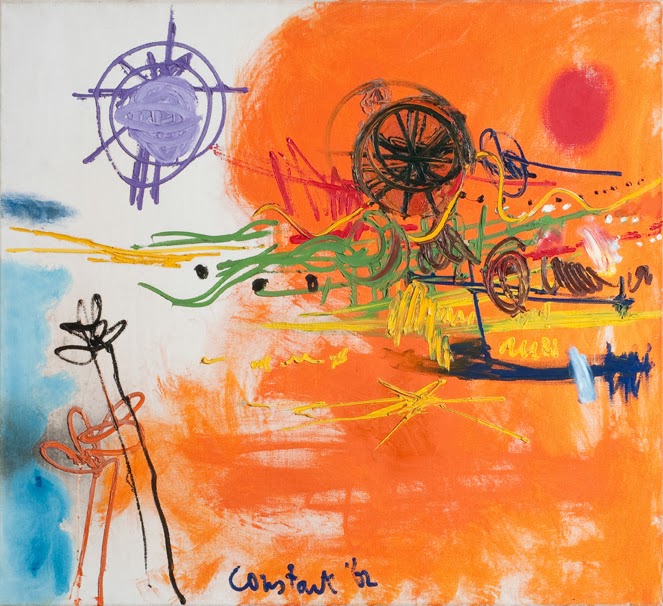 Cobra, an interdisciplinary avant-garde European movement with far reaching international impact, was itself a product of international dialogue and creative exchange. The acronym Cobra was based on the home cities of its founders – Copenhagen, Brussels, and Amsterdam. Born against a background of crisis in post-World War II Europe, this international group of artists united to create spontaneous art rooted in experimentation and experience. One of the greatest strengths of the Cobra movement was its exuberant optimism in the face of devastation.

Anchored in the belief that every human being is creative, Cobra philosophy was inspired by psychology, mythology, popular culture, utopian vision, and innovative approaches to art history, expressed not only in painting and sculpture, but also through music, film, and written word. The Cobra artists thought deeply about the role of the artist in society. Their aim was art made for and by everyone, irrespective of class, race, intellect, and educational level – core values of the Cobra movement that are still very relevant today.

The Museum of Art | Fort Lauderdale is home to the largest and most comprehensive collection of Cobra artists in the United States. Last year we partnered with the Cobra Museum of Modern Art in Amstelveen (a suburb of Amsterdam, the Netherlands) to create a series of Cobra related exhibitions, publications, and symposia to take place through 2016. The first of these, Spirit of Cobra (opening in Fort Lauderdale on November 8, 2013, and guest curated by Dutch art historians Katja Weitering and Brenda Zwart), unites works from both collections and serves as a general introduction to this pivotal and profoundly influential avant-garde movement. In addition to works from the Museum of Art | Fort Lauderdale and the Cobra Museum of Modern Art, the exhibition features significant loans from American public and private collections that have not been examined for many years, and in some cases never before exhibited in the U.S. The exhibition will also engage visitors of all ages through inclusion of an interactive playful space inspired by the joyful, direct expression Cobra artists sought out in children’s art.

Spirit of Cobra showcases the origins of the movement, which united poets, painters, sculptors, photographers, and anthropologists from Copenhagen, Brussels, Amsterdam, and other locations after World War II, and encompasses the contradictory and experimental tendencies within the Cobra movement, which lasted formally from 1948 to 1951. The Cobra artists took inspiration from creativity outside the mainstream art world and actively worked together in a group experiment that was extremely productive in fostering their individual creative trajectories even as it insisted on the artist’s role in a larger social network.

The heart of the Cobra movement is collective activity that attempts to bridge—without collapsing—a rich diversity of personal perspectives and creative media. Although the Cobra movement is known primarily through the later careers of several of its most important members (mostly painters) including Pierre Alechinsky, Karel Appel, Constant, Corneille, Christian Dotremont, and Asger Jorn, their working methods were profoundly shaped by Cobra’s commitment to collective investigation and experimental practices.

Spirit of Cobra focuses on the unique meeting of a group of young artists from several European countries from 1948 to 1951, brought together by a desire to start over after the war and an interest in the legacy of the prewar avant-gardes, especially Surrealism. They came together after parallel attempts to develop a modern, expressive art and poetry related to politics, myth, and popular culture, as explored in the Linien and Helhesten groups in Denmark, the Reflex group in the Netherlands, and the Surrealists in Belgium. They considered geometric abstraction too inhuman and apolitical, Surrealism too academic and metaphysical, Socialist Realism too dogmatic. They demanded a “living art” based on a seemingly paradoxical combination of spontaneity, material immediacy, popular art forms, and socialist politics.

The organized movement lasted less than three years, but deeply ingrained the artists’ later focus on experience and experiment over the production of finished art objects. Their avant-garde-inspired experimentalism was tempered by an interest in using visual imagery (sometimes in animal form) to open a dialogue with a broader audience. Their legacy extends in several directions, from Alechinsky and Dotremont’s exploration of the relationship between word and image to Jorn and Constant’s overtly political interventions in architecture and urbanism in the Situationist International (1957–61).

As part of the Museum of Art | Fort Lauderdale’s ongoing commitment to Cobra scholarship, in 2014 we will present Helhesten: The Hel Horse – Danish Cultural Resistance during World War II (guest curated by Kerry Greaves), an examination of this important artistic precursor to Cobra. Animal Culture, guest curated by Katja Weitering (Creative Director, Cobra Museum of Modern Art) and Karen Kurczynski (Assistant Professor of Art History, University of Massachusetts, Amherst), is a comprehensive exhibition that places Cobra within a world context. After opening in Fort Lauderdale in late 2015, Animal Culture will travel to the Cobra Museum of Modern Art in the Netherlands, as well as 2-3 additional US venues.

Spirit of Cobra is supported through a grant from John S. and James L. Knight Foundation, as part of its Knight Arts Challenge with additional funding provided by Linda J. Marks and Stephen R. Marks, Daniel and Jan Lewis and the David and Francie Horvitz Family Foundation.

Funding for this exhibition provided through a grant from the John S. and James L. Knight foundation, as part of its Knight Arts Challenge with additional funding provided by Linda J. Marks and Stephen R. Marks.

Funding for the Museum of Art is provided, in part, by the Broward County Board of County Commissioners, as recommended by the Broward Cultural Council; the State of Florida, Department of State, Division of Cultural Affairs; and the Florida Council on Arts and Culture.