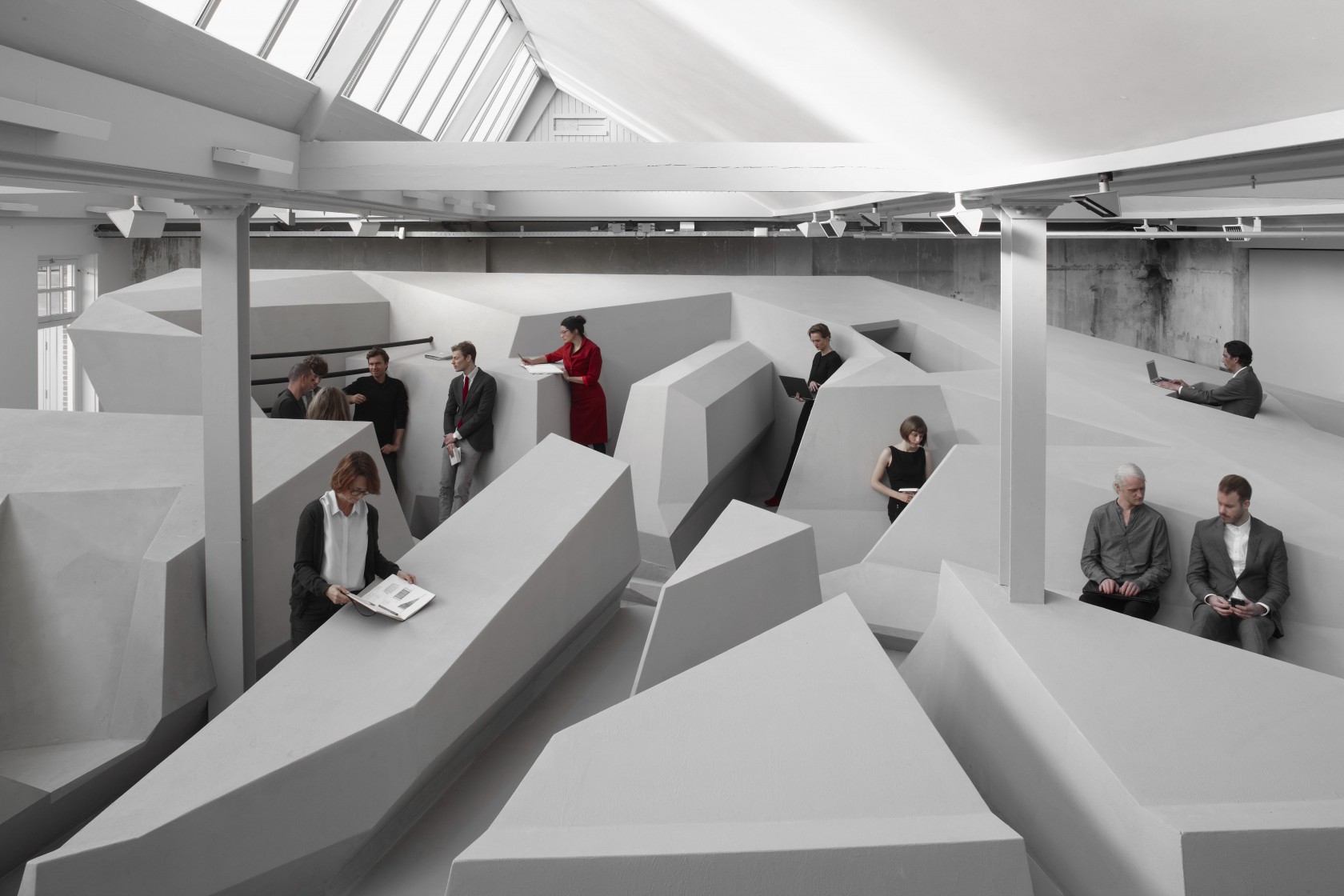 Rietveld Architecture-Art-Affordances- RAAAF- operates at the crossroads of architecture, art and science

The title of the 2015 edition of the Chicago Architecture Biennial is ‘The State of the Art of Architecture’ and there are five Dutch participants. One of them is RAAAF (Rietveld Architecture-Art-Affordances). The installation they show at the Biennial is called ‘The End of Sitting’. It’s a thinking model that questions our ‘sitting society’. This architectural installation is a concept for a new working environment wherein the chair and desk are no longer unquestionable starting points. Instead, the installation’s various affordances solicit visitors to explore different standing positions in an experimental work landscape. More about this installation and how it’s created you can read further on in this article.

RAAAF operates at the crossroads of architecture, art and science. The studio started in 2006. RAAAF makes location- and context specific work and has developed the design approach of ‘strategic interventions’, which derives from the respective backgrounds of the founding partners: Prix de Rome Architecture laureate Ronald Rietveld and philosopher Erik Rietveld. Together with junior project leader Arna Mackic they form the core design team. Through a unique working method based on multidisciplinary research with scientists and other specialists, RAAAF’s real-life thinking models link local qualities with long-term strategies.

For RAAAF every project is a manifesto in itself. Our interventions are the result of an independent attitude and research agenda, starting from our own fascinations while confronting them with urgent societal issues. What interests us is what the world would be like if we were free of conventional limits. What could be new thinking models if we lived by a different set of rules. Showing these visions is the aim of each project.

A striking example of this is the installation ‘Vacant NL’, the Dutch contribution to the Venice Architecture Biennale 2010, in which the potential of 10.000 governmentally-owned vacant buildings was shown, now central in the discussions concerning innovative re-use. Another example is the cut-through monument ‘Bunker 599’, which unorthodoxly questions the Dutch and UNESCO policies on cultural heritage.

RAAAF’s work has been published world-wide and exhibited at leading art- and architecture biennales such as those of São Paulo, Istanbul and Venice. The studio has won several prestigious awards, including the Prix de Rome Architecture 2006, the Rotterdam Design Prize 2011, the Architectural Review Award 2013 and a VIDI-award of the Netherlands Organisation for Scientific Research (NWO). In 2013 RAAAF earned the title of New Radical and Dutch Architect of the Year. The various juries emphasize the ability of the studio to cross and stretch the disciplinary borders of architecture, philosophy and art.

Complex societal issues require more than ready-made solutions. Based on multidisciplinary research with scientists and other specialists, RAAAF’s architectural installations and interventions are clear, real-life thinking models that open up novel perspectives and horizons.

About ‘The End of Sitting’

Check out what Erik Rietveld has to say about the installation at the Chicago Architecture Biennial HERE. 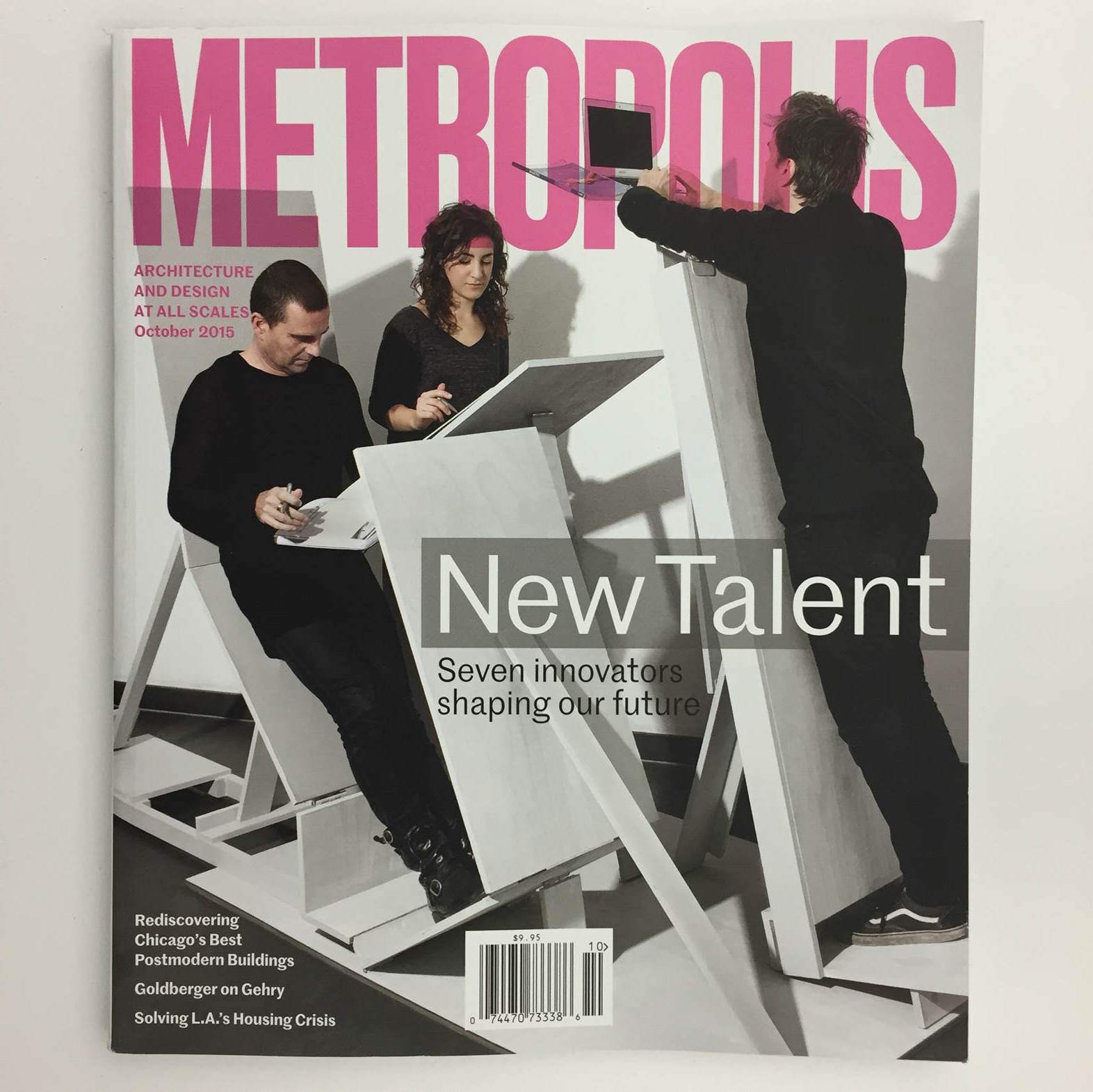 ‘The End of Sitting’ is an installation at the crossroads of visual art, architecture, philosophy and empirical science. In our society almost the entirety of our surroundings have been designed for sitting, while evidence from medical research suggests that too much sitting has adverse health effects. RAAAF and visual artist Barbara Visser have developed a concept wherein the chair and desk are no longer unquestionable starting points. Instead, the installation’s various affordances solicit visitors to explore different standing positions in an experimental work landscape. ‘The End of Sitting’ marks the beginning of an experimental trial phase, exploring the possibilities of radical change for the working environment. This project is a spatial follow-up of the recently released mute animation ‘Sitting Kills’ by RAAAF and Barbara Visser, developed for the Chief Government Architect of the Netherlands. The project expands on RAAAF founding partner Erik Rietveld’s research on how immediate environments affect behavior, which is funded by the Netherlands Organisation for Scientific Research.

There has been a lot of international press about this project, which you can read HERE.

The following video shows the endless possibilities of working with ‘The End of Sitting’.

When aircraft Shelter 610 opens its ruthless doors, a monstrous black behemoth slowly comes driving out. The object revives the mysterious atmosphere of the Cold War and its accompanying terrifying weaponry. At an almost excruciatingly slow pace, the artwork uses its caterpillar tracks to cross the seemingly infinite runway. Due to this brutal object’s constantly changing position in the serene landscape, it allows the visitor to experience the area and the history of the military airbase in new ways.

At the same time, the artwork functions as a working environment for researchers. Their temporary stay creates opportunities for innovative research programs that otherwise would be impossible. For example, inside the object, students of the Technical University Delft (Aerospace / CleanEra) will develop a program for the innovative flying of the 21st century: “no noise, no carbon, just fly”. The old runway is the perfect test site for state of the art aviation experiments.

The mobile sculpture and shelter 610 are perfect spaces for research, experiment and innovation for groups coming from various disciplines. The unconventional combination of nature and Cold War history offers an exciting environment for the development of knowledge about nature, technology and aviation.

In a radical way this intervention sheds new light on the Dutch policy on cultural heritage. At the same, it makes people look at their surroundings in a new way. The project lays bare two secrets of the New Dutch Waterline (NDW), a military line of defence in use from 1815 until 1940 protecting the cities of Muiden, Utrecht, Vreeswijk and Gorinchem by means of intentional flooding.

A seemingly indestructible bunker with monumental status is sliced open. The design thereby opens up the minuscule interior of one of NDW’s 700 bunkers, the insides of which are normally cut off from view completely. In addition, a long wooden boardwalk cuts through the extremely heavy construction. It leads visitors to a flooded area and to the footpaths of the adjacent natural reserve. The pier and the piles supporting it remind them that the water surrounding them is not caused by e.g. the removal of sand but rather is a shallow water plain characteristic of the inundations in times of war.

The sliced up bunker forms a publicly accessible attraction for visitors of the NDW. It is moreover visible from the A2 highway and can thus also be seen by tens of thousands of passers-by each day. The project is part of the overall strategy of RAAAF and Atelier de Lyon to make this unique part of Dutch history accessible and tangible for a wide variety of visitors. Paradoxically, after the intervention Bunker 599 became a Dutch national monument.