Immersed In Light: Studio Drift at the Mint Museum

From September 21, 2019 – April 26, 2020, Mint Museum’s exhibition Immersed in Light will feature five works by Studio Drift. It will be the first solo museum exhibition outside Europe by Studio Drift, a design group based in the Netherlands that creates breathtaking sculptures that explore the relationship between humanity, nature and technology.

The Mint exhibition will feature one of Studio Drift’s most iconic works: the Fragile Future 3 light installation — a reflection of light as the basis of all life — made from hundreds of tiny dandelion seeds that have been hand-glued, seed by seed, onto LED lights and held together by bronze electrical circuits. 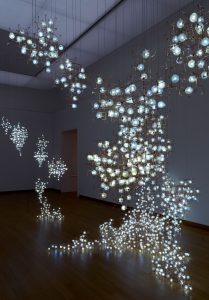 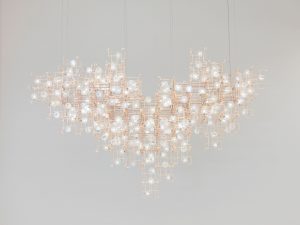 Nearby will be Amplitude, an installation made of 20 large but delicate glass wings that move smoothly to suggest a giant bird in flight.

The exhibition will also include two video rooms, one of which will feature Drifters, an escapist film by Studio Drift and Sil van der Woerd that showcases a floating block of concrete as it searches for its origin in the Scottish Highlands. The other video space will feature the documentary film version of Franchise Freedom, the performance piece that debuted during Art Basel/Design Miami 2017 and came to life again during Burning Man 2018, consisting of 600 Intel drones soaring through the night sky, as they fluidly simulated the flight patterns of starlings. Several drones will be installed overhead to add to the exhibition experience. 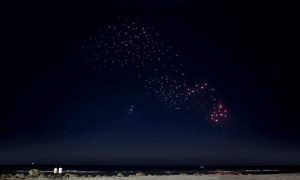 A fifth immersive installation known as Coded Coincidence will be on view at Mint Museum Uptown’s Level 5 expansion space, an unfinished area with an industrial, edgy vibe. Museum visitors will be able to walk through a massive plexiglass chamber, while more than a dozen steerable wind blowers direct and lift elm seeds to swirl around the viewer. The project was inspired by the many elm trees in Amsterdam and is also a fitting nod to Charlotte’s vast tree canopy.

The inspiration for this work came while Studio Drift was harvesting dandelions for Fragile Futures and saw elm tree seeds twirling through Amsterdam. “Their size, weight, and form are engineered by nature to flow delicately on the slightest stream of air,” says Studio Drift co-founder Ralph Nauta. “All to find a place to survive and bring new life. That fascinated us, that nature can seem random but always has a purpose. We want to try to understand this behavior and capture it.” 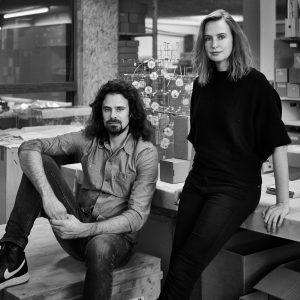 Studio Drift was established in 2007 by Lonneke Gordijn and Ralph Nauta, after their graduation from the prestigious Academy Eindhoven. The studio has since grown to more than 20, including artists, technologists/engineers, and more, with Nauta and Gordijn at the helm.  Gordijn and Nauta create installations and interactive sculptures that highlight the relationship between nature, human, and technology. Gordijn’s fascination with nature and Nauta’s interest in science fiction and technology come together in an intriguing way. Their work often involves large, site-specific, and moving installations that are realised all over the world.

Established in 1936 as North Carolina’s first art museum, The Mint Museum is a leading, innovative cultural institution and museum of international art and design. With two locations—Mint Museum Randolph in the heart of Eastover and Mint Museum Uptown on South Tryon Street—the Mint boasts one of the largest collections in the Southeast and is committed to engaging and inspiring members of the global community.

“Making and building are in their DNA, but it’s Studio Drift’s wild imagination and ‘anything is possible’ mantra that sets them apart from other contemporary artists. Their explorations of natural and supernatural phenomena take us on an emotional ride from ‘wow’ to wonder.” - Annie Carlano, senior curator for the exhibition.