Soho Photo Gallery in June presents a collection of artists who use their cameras to create impressions – moments of reflection. Susanne Middelberg’s use of the comic hero Wonder Woman is joined by others’ work that variously contemplates nighttime New York, mothers, shapes and glimpses through a train window. Each artist’s work creates both an image and a thought. 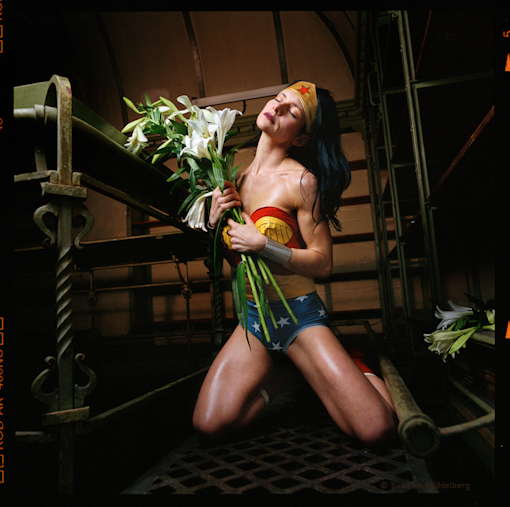 “As a child there was a time when I read the Wonderwoman comics, and I completely merged into them. My series tells the story about a comic heroine, created by Williamd Moulton Marston in 1941. Wonder Woman is a heroine. But within this series I show her vulnerable and human side. In my images Wonder Woma experiences small, everday, beautiful and painful moments like each of us. She is a woman just like every woman.

In the series, I photograph the comic heroine with a slight sense of (self) irony and melancholy. While slightly mocking the American ideal of glory and perfection, the series expresses love for the ideas and values behind the comic character Wonderwoman; honesty, justice, love and strength.

I want people to identiy with the main character of the series. Therefore I wanted to personalize the story and make it real. The series is not only a universal image of a woman. Behind every picture is a real story from my life. Since 19 years I make at least one photo every year representing a significant moment from this year.”

After completing a modern dance education at the Higher school for Arts in Arnhem, she graduated in 1998 from the Academy for Visual Arts, from the photography department. Since then she has worked as a freelance photographer making independent work and by order of magazines and theater dance posters. Susanne specializes in portrait and theater- dance photography.

As a member of the artists-community she has regular exhibits at Pulchri. She has also had exhibitions with her work at the Cadance festival in the Hague, at Holland Dance Festival, Ernst & Young, the Regentenkamer in the Hague, Kinkong gallery in the Hague, Photogallery 2 1/2 by 4 1/2 in Amsterdam, Reflex Modern Art Gallery in Amsterdam, at the Art Location in Hildesheim, Smelijk en Stokking and gallery Hollandsche Maagd in Gouda. In 2012 she exhibited in New York at Photoville. Publications have appeared in Focus, GKF fotografen 2009/2010 and 2011/2012, Ballet-Tanz, Kvk-Kunstenaarswijzer, PANL Photography Annual of the Netherlands and “your most precious possession” published by PANL.

Soho Photo Gallery was founded in 1971 by a group of New York Times photographers who wanted to create a venue for photography as fine art.