Talking About Taboos: An Evening of Dutch and Flemish Literature with Words Without Borders 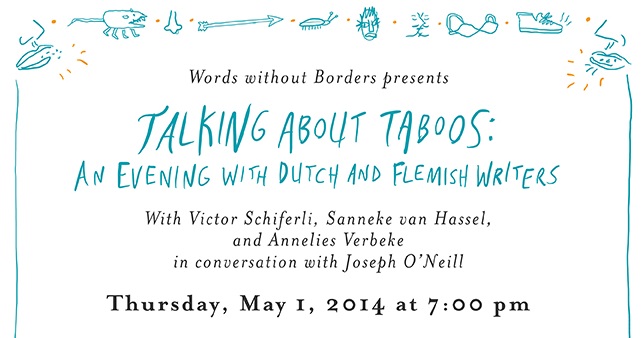 As part of PEN World Voices Festival of International Literature, Words Without Borders presents an evening of contemporary Dutch and Flemish writing at BookCourt in Brooklyn on May 1. Dutch writer Sanneke van Hassel and Annelies Verbeke will read from the issue and join WWB guest editor Victor Schiferli and novelist Joseph O'Neill for a lively discussion on taboos.

As part of PEN World Voices Festival of International Literature, Words Without Borders presents an evening of contemporary Dutch and Flemish writing at BookCourt in Brooklyn on May 1. Dutch writer Sanneke van Hassel and Annelies Verbeke will read from the issue and join WWB guest editor Victor Schiferli and novelist Joseph O’Neill for a lively discussion on taboos.

About Words Without Borders

Founded in 2003, Words without Borders promotes cultural understanding through the translation, publication, and promotion of the finest contemporary international literature. Their publications and programs open doors for readers of English around the world to the multiplicity of viewpoints, richness of experience, and literary perspective on world events offered by writers in other languages. They seek to connect international writers to the general public, to students and educators, and to print and other media and to serve as a primary online location for a global literary conversation.

Joseph O’Neill grew up in The Hague. He is the author of four books, most recently Netherland. A new novel, The Dog, appears in September.

Sanneke van Hassel (b. 1971, the Netherlands) studied theater arts and cultural history. Her debut collection of short storiesIJsregen (Ice Rain), published in 2005, was nominated for several literary awards. She is the author of Sarajevo: Pieces of Sarajevo (2006); Witte veder (White Feather, 2007), for which she received the BNG Literary Award; Nest (2010), her first novel; and Ezels (Donkeys, 2012). In 2012, together with Flemish writer Annelies Verbeke, she published an anthology of short stories from around the world, Naar de stad (To the City, 2012).

Victor Schiferli (b. 1967, the Netherlands) is a writer and poet and an advisor at the Dutch Foundation for Literature, supporting the translation of books from the Netherlands. Between 2001 and 2007 he was commissioning editor at De Bezige Bij, one of the country’s leading publishing houses. He made his debut with the poetry collection Aan een open raam(At An Open Window, 2000, nominated for the C. Buddingh debut of the year award), followed by Verdwenen obers(Disappeared Waiters, 2005) and Toespraak in een struik (A Speech In the Bushes, 2008, nominated for the Hugues C. Pernath Prize). His first novel, Dromen van Schalkwilk (Dreams of Schalkwijk), was published in 2012. He has edited several anthologies and has also worked as a journalist, critic, and photographer.

Annelies Verbeke’s debut novel Sleep! was published by De Geus (the Netherlands, 2003). She is also the author of the novels Giant and Saving Fish, two collections of short stories (Greener Grass and Assumptions—the latter a “novel in stories”), a collection of journalistic stories (Awake, together with photographer Charlie De Keersmaecker) and, most recently, the graphic novella Tirol Inferno with illustrator Klaas Verplancke. Her work has been translated into 22 languages and has won numerous prizes. She has written scripts for the theater and for television, and regularly writes for newspapers. She is a great lover of short stories, and has written on the subject in various publications, contributed to short story festivals around Europe, and produced Naar de Stad (To the City), an anthology of short stories from around the world, along with author Sanneke Van Hassel. Verbeke is a board member of PEN Belgium (Dutch-speaking). She lives in Ghent, Belgium.

This event is supported as part of the Dutch Culture USA program by the Consulate General of the Netherlands in New York and is presented in partnership with Flanders House, the Dutch Foundation for Literature, the Flemish Literature Fund, and BookCourt.