From December 6, 2017, to April 2, 2018, Vizcaya Museum and Gardens presents the exhibition "Overload" with Tanja Smeets and Arnout Meijer.

Four artists have been commissioned to explore the activation of the senses in this immersive exhibition created for the estate. Artists include David Brooks (NY, NY), Orlando Jacinto Garcia (Miami, FL), Arnout Meijer (Amsterdam, NL) and Tanja Smeets (Utrecht, NL). The artists’ work emphasizes engagement and considers how the activation of the senses can alter the experience of a space.

The exhibition marks the first occasion where CAP commissions work by international artists. Alongside Miami-based composer Orlando Jacinto Garcia and New York-based artist David Brooks, Overload presents the work of Dutch artists Arnout Meijer and Tanja Smeets. Global perspective is a cornerstone of Vizcaya’s history, and we are pleased to have an international group of artists respond to Vizcaya for Overload. 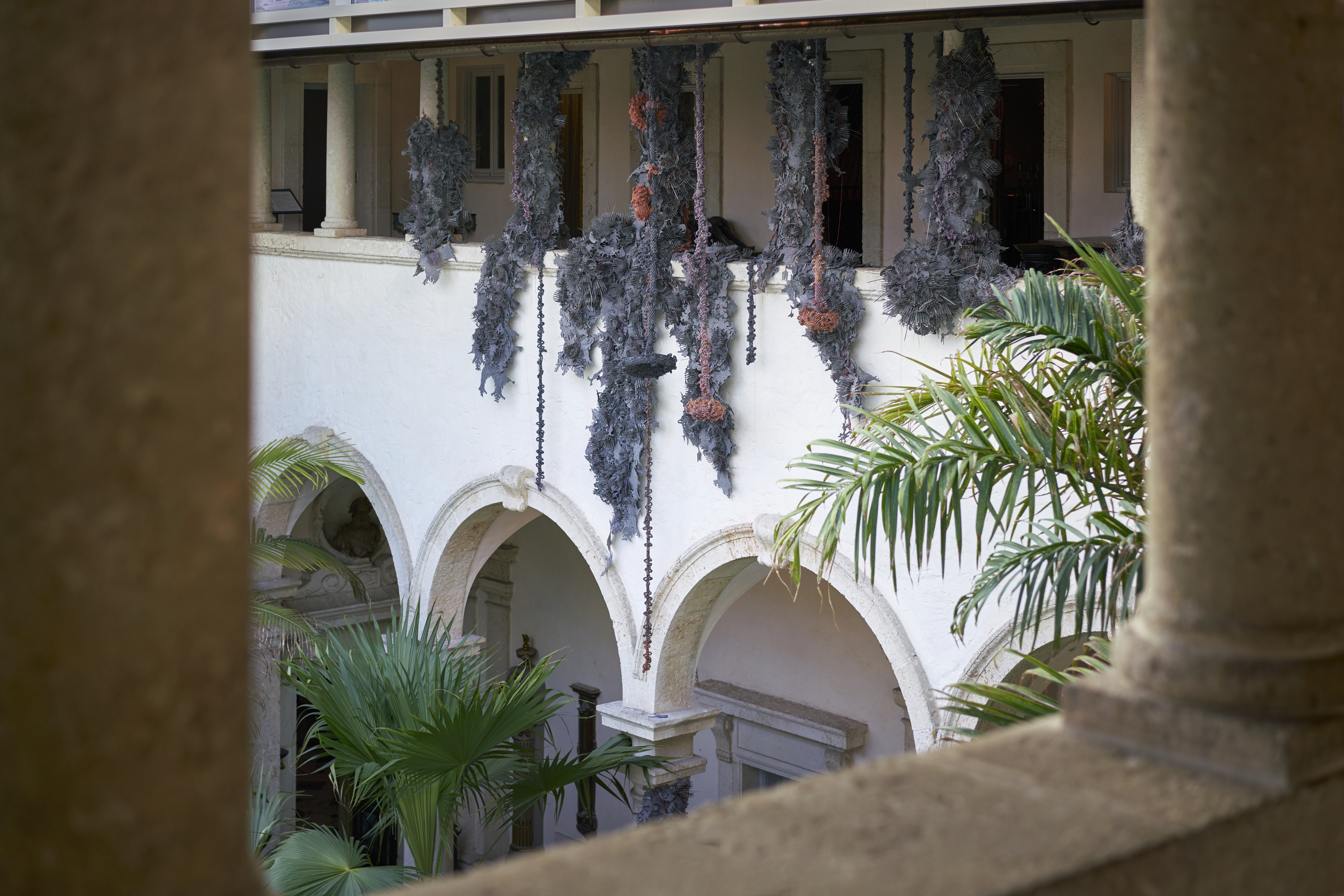 The Main House’s proximity to and interaction with the natural environment that surrounds it is one of its main distinguishing design features. The enveloping landscape borders the house to the north, south, and west and the shoreline of Biscayne Bay lies directly to the east. Ironically, while experiencing the immersive details of the decorated rooms, visitors can sometimes overlook the lush landscape that surrounds them.

With Liquid Garden Tanja Smeets remedies this by bringing the outdoors inside. Her large organic structures infiltrate the space as if they grew there naturally, and seem to suggest they have always been there, interwoven with the dominant characteristics of the architecture. Located on the North Gallery of the second floor, the work’s plantlike roots crawl over the floor, developing into large, uprising stems and new plant systems.These plants adapt themselves to space they are in like a chameleon would to a new environment. Through Smeets’s process, a level of tension and unpredictability are introduced to spaces that are normally teeming with control, precision, and logic. The imbalance and disruptive quality introduced by this juxtaposition are at the core of the installation.

The work of Arnout Meijer explores the relationship between reality and illusion and can be characterized by his ongoing investigations of perception, light, sound, and culture. In Meijer’s site-specific installation of colored film and bulbs at Vizcaya, visitors become aware of their own unique sense of sight.

A patchwork of original Roman statues invented coats of arms, and electric “candles” combine to create a hyperreal Renaissance estate. The artificial illusions––composed of materials considered to be fake, real, marble, concrete, old, and new––are not discarded as imitation, but instead present a new, multilayered reality. Throughout the exhibition, the work will change the position of the sun and the other elements in the sky change. Just as people around the world see the same sun but a different sky, visitors can only experience a complete picture of 46020 ft³ cyan/yellow from multiple positions in order to take in the illusionary effects that shape their reality.

Vizcaya Museum and Gardens is a National Historic Landmark that preserves the Miami estate of agricultural industrialist James Deering to engage our community and its visitors in learning through the arts, history and the environment. Built between 1914 and 1922, Vizcaya is one of the most intact remaining examples from this era in the United States history, when the nation’s most successful entrepreneurs built estates inspired by the stately homes of Europe. Vizcaya features a Main House filled with a decorative art collection, 10 acres of formal gardens, a Rockland hammock (native forest), mangrove shore, and a historic village that is being restored to tell Vizcaya’s full story and provide additional spaces for programs and community outreach, including those on agriculture. Vizcaya has been a community hub since it opened to the public in 1953; it currently welcomes about 275,000 visitors annually.

The Contemporary Arts Program (CAP) is a Vizcaya-based commission program that provides artists with the creative challenge to develop original, site-specific work in response to a historic site situated in the public realm. CAP was inspired by the dynamic, creative spirit that characterized Vizcaya’s inception one hundred years ago, and it preserves Vizcaya owner James Deering’s tradition as a patron of the arts.

From John Singer Sargent, a houseguest who painted watercolors of the estate, to A. Stirling Calder, who sculpted the figures on the Barge, and Robert Winthrop Chanler, creator of the swimming pool grotto ceiling mural, Vizcaya continues a dialogue between the historic and the contemporary. As was the case one hundred years ago, Vizcaya’s singular sense of place remains the point of departure for artists.

Behind the Velvet Rope: Overload with Arnout Meijer and Tanja Smeets. An exclusive Vizcaya members-only pre-opening tour of Overload led by artists Meijer and Smeets. Tickets for members: $5. Join Vizcaya online at www.vizcaya.org

Opening Night: Overload. Be one of the first to see the exhibition, meet the artists and experience Vizcaya. Tickets: Free for Vizcaya Members; $10 for the general public. Purchase tickets online at http://bit.ly/VizOverload

Gardens by Moonlight: Overload Edition. Stroll through Vizcaya’s formal gardens by moonlight and explore the Overload exhibition in the Main House. Tickets $20 for adults, $15 for children. Purchase tickets online at http://bit.ly/VizOverloadGardens