The exhibition “The American Landscape” by The Gallery Club presents the five well known contemporary Dutch photographers Iwan Baan, Charlotte Dumas, Marie-José Jongerius, Sem Langendijk and Bert Teunissen, who all have extensively photographed the American landscape over the course of the years. The objective of the exhibition is to give the audience a new and different perspective on their country, seen through the eyes of the Dutch photographers. Their work not only shows the diversity and grandeur of the American landscape, but also addresses important (social) matters, such as climate change, migration and urban planning. 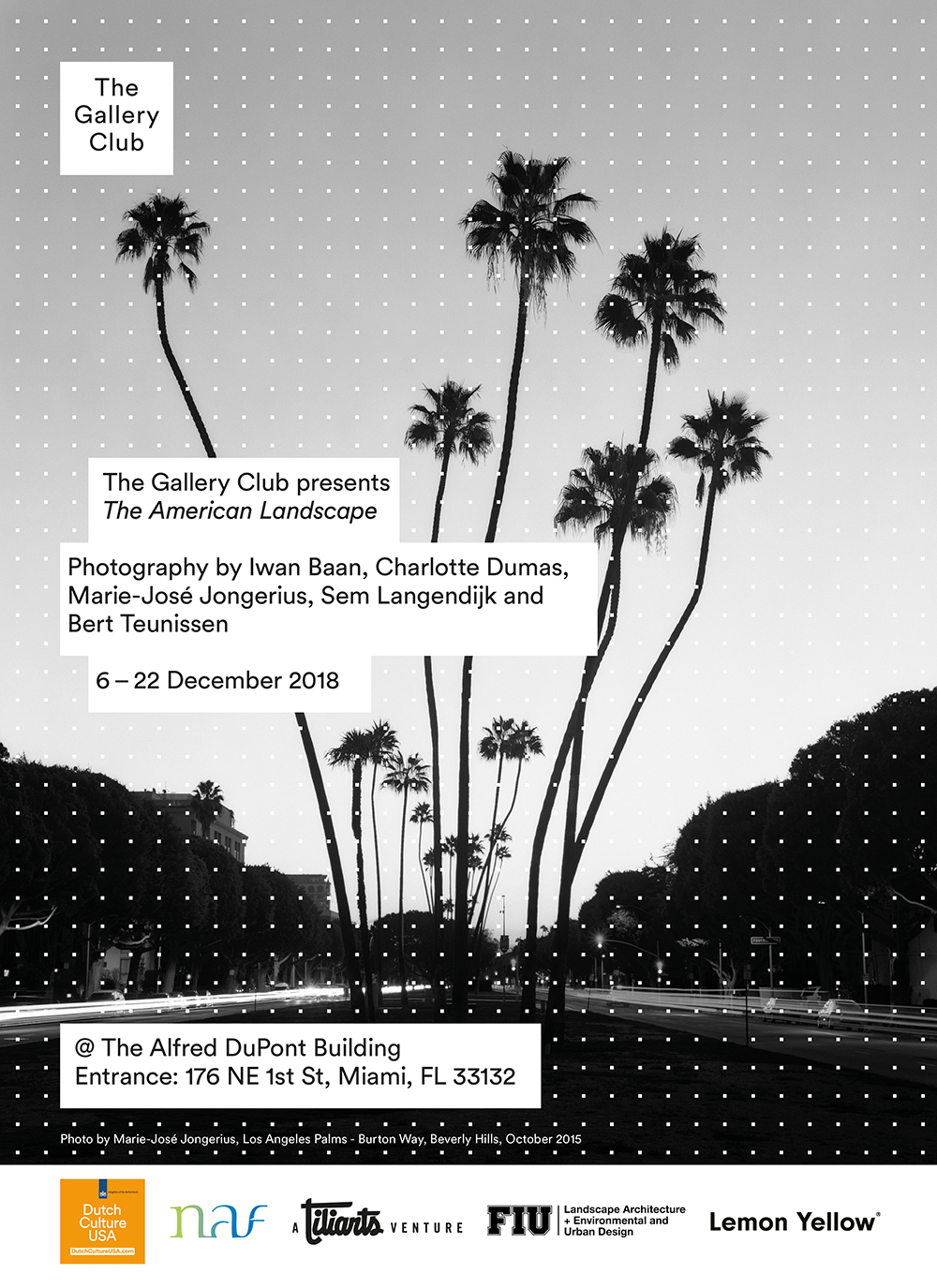 The opening of the exhibition is co-hosted by the Consulates-General of the Netherlands in New York and Miami.

Please rsvp before December 4 to gili@thegalleryclub.com

On Saturday, December 8th guests will be treated to an exclusive dinner during an evening filled with beautiful photography, a gallery talk by curator Gili Crouwel (director and founder of The Gallery Club), artist talks by the photographers, video slide-show and tunes by Jazzfunked.

In collaboration with the FIU Architecture and Landscape Architecture Department, The Gallery Club organizes a special afternoon with the photographers Marie-José Jongerius, Sem Langendijk and Bert Teunissen, who will give special presentations about their work, followed by a panel discussion with:

Consul General Gera Sneller of the Netherlands will give her opening remarks and the afternoon is moderated by David Rifkind, associate professor Architecture and Landscape architecture at FIU.

Photographer Iwan Baan is primarily known for images that narrate the life and interactions that occur within architecture. With no formal training in architecture, he mirrors the questions and perspectives of the everyday individuals who give meaning and context to the architecture and spaces that surround us. This artistic approach has given matters of architecture an approachable and accessible voice.

Many design and architecture websites funnel a constant stream of images to architects around the world. Most of those images are paid for by the architect themselves; they are always stylized and often heavily edited. If an electrical pole is in the way, or a piece of the façade is falling off, this disappears through the magic of Photoshop. Not so much in Baan’s photos, where it is likely to stay in place. His clients – he works for OMA, Herzog & De Meuron, Zaha Hadid Architects, Sou Fujimoto, Diller Scofidio & Renfro, SO-IL, amongst others – pay for a certain kind of honesty.

His photos are documented around the architecture, what people do in the space, where the space is and what the surroundings are. He sees buildings as backdrops for his photographs of people. And because people are a constant factor in his photos it allows the viewer to connect to the photo more and make it feel more natural.

Aerial photos are also very important for Baan: it gives him an incredible understanding of how a city is built and structured. It’s often one of the first things Baan does when he comes into (a new) town: get in a helicopter or look for the highest building in that city to get an aerial view. The aerial shots in this exhibition are from Los Angeles and were commissioned for the headquarters of Beats by Dr. Dre. They feature the neighbourhoods where the Beats’ founders grew up in: Silver Lake, Holmby Hills and Hollywood Hills. Other photos include abstract images of freeway intersections and oil pump jacks still in use in Baldwin Hills. 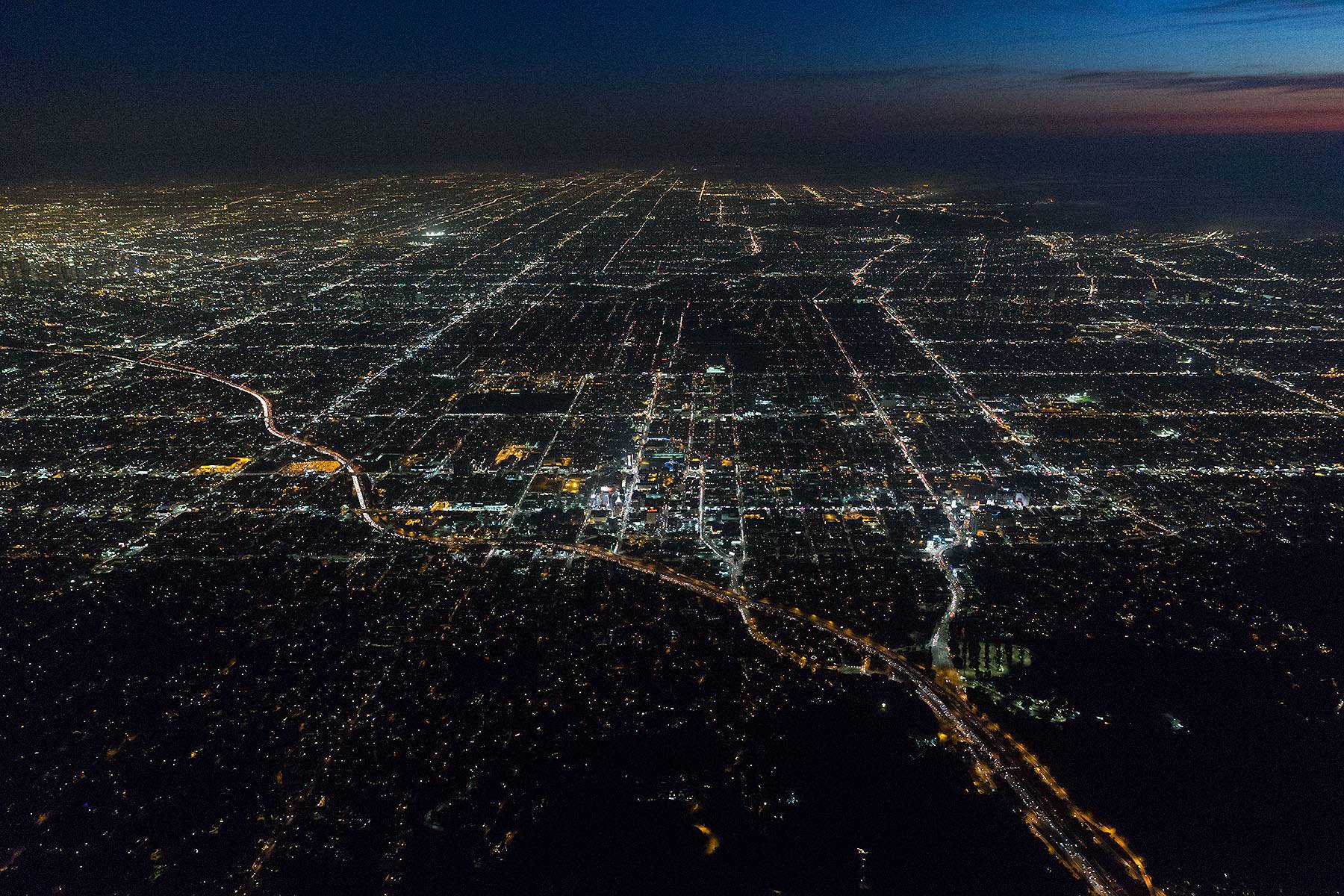 A vital thread in Charlotte Dumas’ work is the notion that the state of humanity can be read and studied by the way we relate to animals. Dumas’ choice of subject relates directly to the way we use, co-exist with, and define specific animals, assigning various symbolisms to them as well as our own personal reflections.

The Widest Prairies (2013) focuses on the wild horses of Dayton, Nevada, famed as one of the first settlements of the gold rush in the West. These horses once symbolized the freedom, possibilities and dreams associated with the American West but now, much like this faded ideal, their very existence is under threat from changing political and economic conditions. This series of photographic encounters depicts the horses as part of a shifting landscape, exposing their resilient character as they visit towns and trailer parks in search of food and water.

Dumas visited the area of Dayton three times over a period of five months; therefore she was able to observe the wild horses in different seasons. She searched and found the horses in the mountains and hills they traverse. Usually she would run into the horses in the residential areas in Dayton and surrounding towns. People are nowhere in sight, as if the horses had taken over the area.

It is becoming increasingly rare that animals live free from us. Unbound by our interference they are yet almost always affected by our presence. Through the constant changes of our societies and behaviors, wild animals and people are bound to meet each other on once separate and now ever more shared territories. Their habitat seemingly overlapping ours, as it is, we set foot in theirs, long ago. 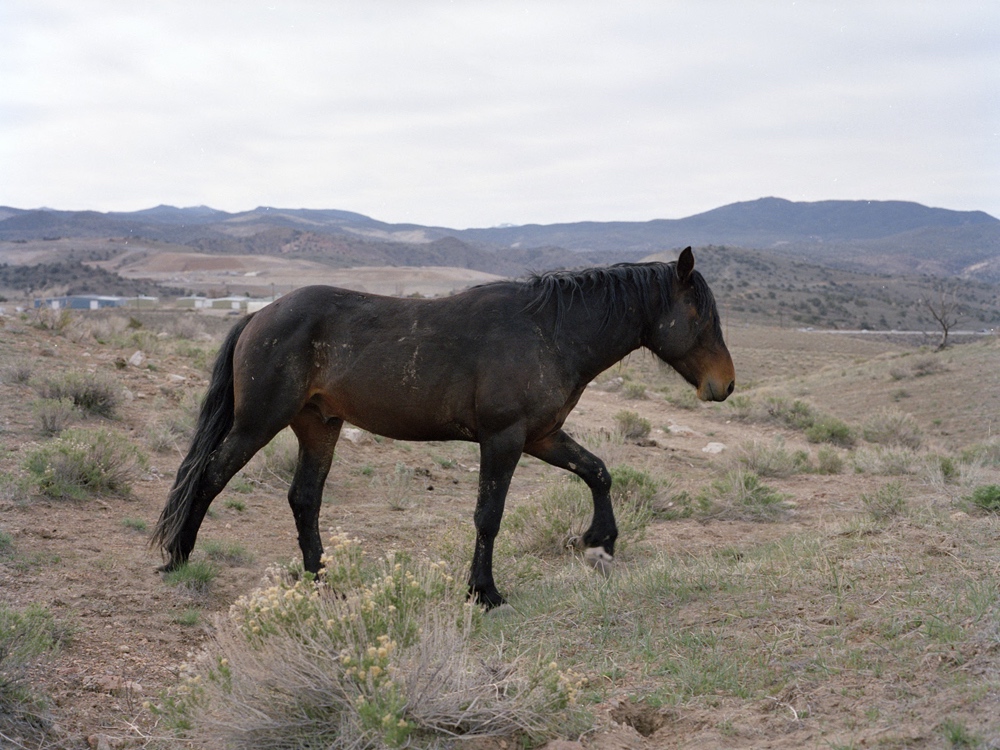 Marie-José Jongerius is a photographer and researcher, based in Amsterdam. In her landscape pictures she looks for boundaries, limits and edges between nature and the manmade world. Where are the interfaces between the organic and the artificial world, and do they fail or succeed? Jongerius tells stories about mankind, not by making pictures of us, but pictures of the traces we leave behind us. She observes geography with an attentive eye for those singular details that make up our daily lives and asks the viewer to consider where we live and how we relate to our respective environments. Her work is not only visual, but also the result of long periods of investigation to confront popular belief and clichés to reality.

For her latest series Los Angeles Palms Jongerius travelled to Los Angeles to capture the iconic Mexican fan palm. In the postwar era, these palms grew into symbols of urban Los Angeles and became familiar fixtures on the horizon. The entertainment industry also magnified their stature; advertisements, TV shows, movies, song recordings, and music videos produced in Southern California made ready use of street palm imagery. Jongerius revisited the most iconic and historic sights in the Los Angeles area to portray the palms, which have all contributed to the iconic image of the city.

Most of these palms were planted in LA for the 1932 Olympic games. Due to lack of water and care, this palm tree will slowly disappear from the streetscape within a decade or two. Jongerius worked with a technical camera, capturing the palm tree somewhere between 4.00 and 8.30am. People never feature in her photos, which create a rather eerie feeling given the fact that the Los Angeles area has about 4 million inhabitants.

Sem Langendijk has an interest in communities and their habitats, the urban environment and spatial arrangement. Growing up in the ‘hinterland’ of Amsterdam, Sem witnessed many changing sceneries throughout the years. He researches the relation between ‘home’ and public space, what impact communities have on their environment and how space functions within the structures of a city. He continues to balance his work on the very narrow edge between visual storytelling and poetic personal documentation. As an observer, he carefully distances himself from his subjects to stay neutral in his observations and raise questions. His photography has a poetic visual language that grows on you while taking a closer look at his work.

Docklands – New York is about the transition of the former harbor area in Red Hook (Brooklyn, NY). Focusing on the high demand for living near the water the project tries to get a grip on shifting social demographics, questioning the function of public space and migration, more commonly known over long distances, thinking about crossing borders or setting out to find a new home. But on a smaller scale, due to social inequality and popularity of ‘the city’, populations are continuously driven to relocate elsewhere, even within the capitals of our Western world. Sem’s long-term project Docklands tries to connect history and a past of shipbuilding and migration overseas with identity of place, a sense of belonging and micro migration.

His personal experiences have led him to start working on this theme through photography. Sem himself had to move from home to home to make way for real estate development and an increase in population and wealth, so in this sense, it’s also a very personal project. He has a strong need for storytelling and commenting on inequality and social difference. Ownership of public space and how communities are affected by changes are what he has been working on in several places, such as Amsterdam, New York and also London. His work in general deals with communities and identity of place and the concept of ‘home’. 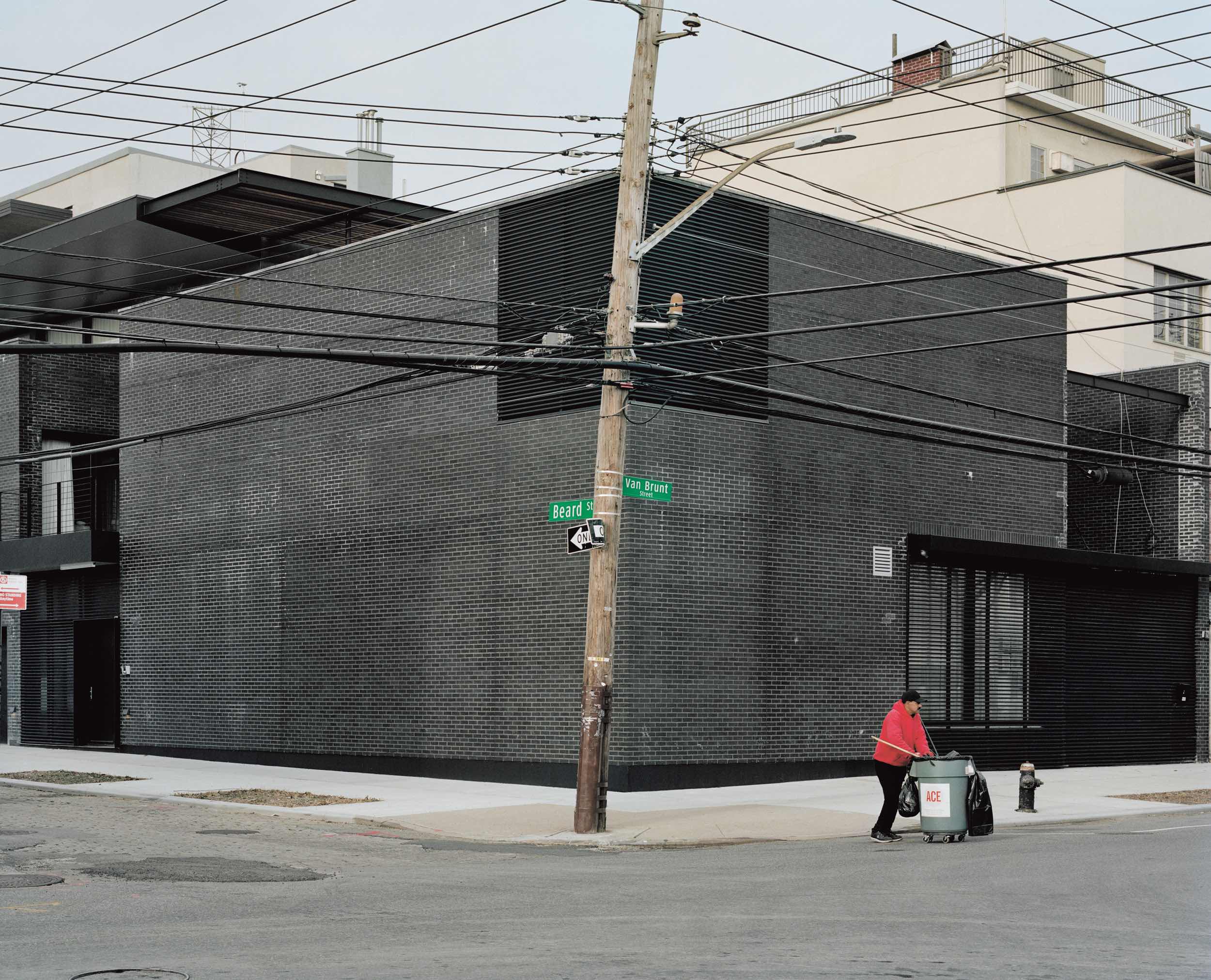 Since the mid 1990’s Bert Teunissen is on the road, photographing the landscape. Always in the same way: shot from behind the steering wheel while driving, using an Olympus Pen, the legendary half frame camera from the 60s and 70s.

All his photographs are printed on out of date photographic paper-stock, creating different flares in colors and contrasts, which makes every print unique and impossible to create again. For Bert Teunissen this irreversible process is part of his search to capture the fluid state of mind while traveling for his project of more than two decades, Domestic Landscapes, of people posing in their domestic spaces. He views his work as both an anthropological study and a study of national character. This series focuses on the dense American landscape of the Everglades in Florida, where Teunissen has made images of people in their domestic environments from Okeechobee to Everglades City. At the same time, he has made a visual record of his journeys in South Florida and the impressions he could record from his rented car.

‘On the Road is my self-produced, newsprint introduction to the travel logs, a way of giving them a starting point. I figured that the trips that I’ve been making for the project are interesting in themselves; so On the Road is solely about the traveling I’ve been doing for the project. I’ve been shooting from behind the steering wheel, through the windscreen, every time the road in front of me caught my eye.’ 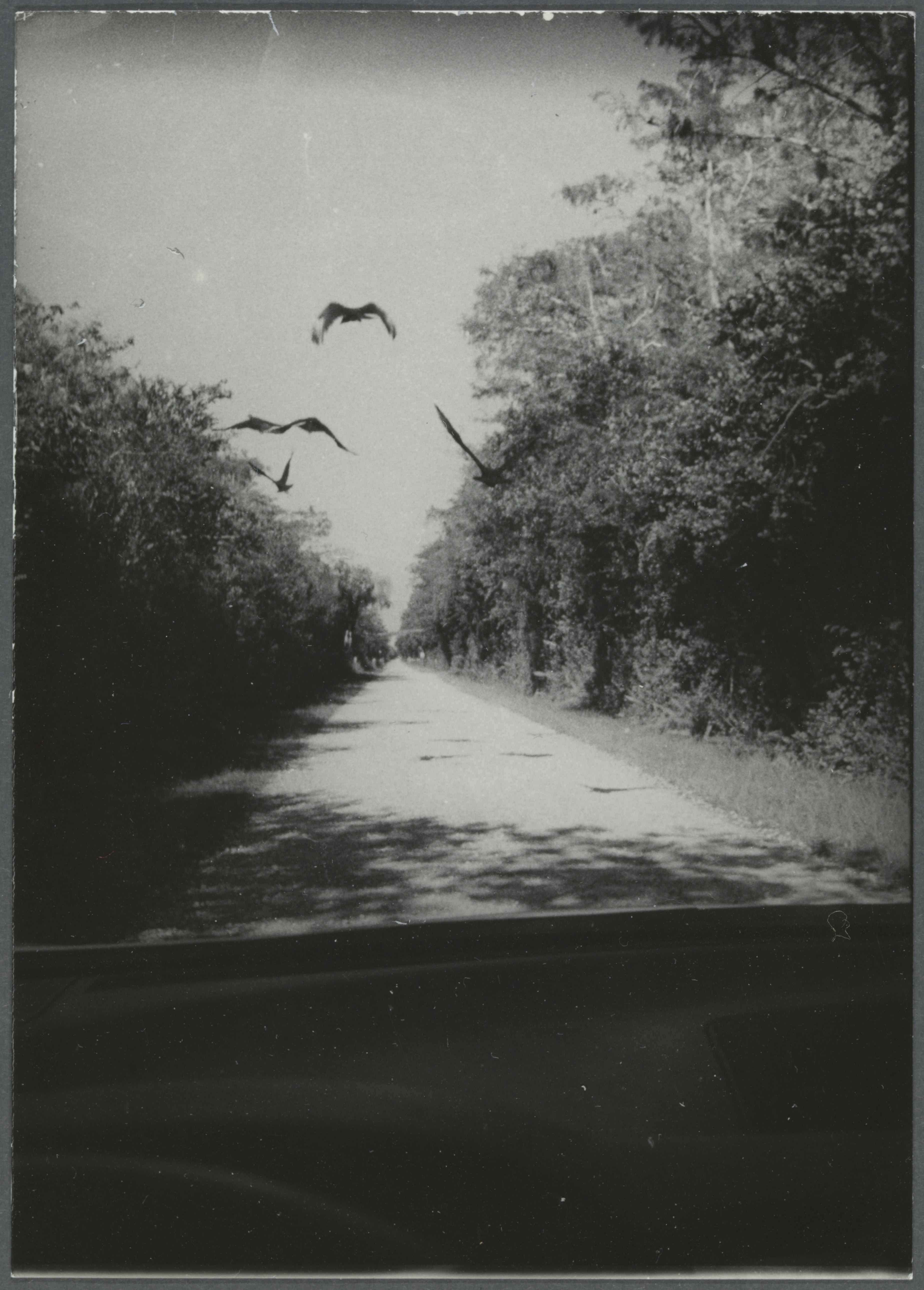 “On the Road Everglades” © Bert Teunissen

About the Gallery Club