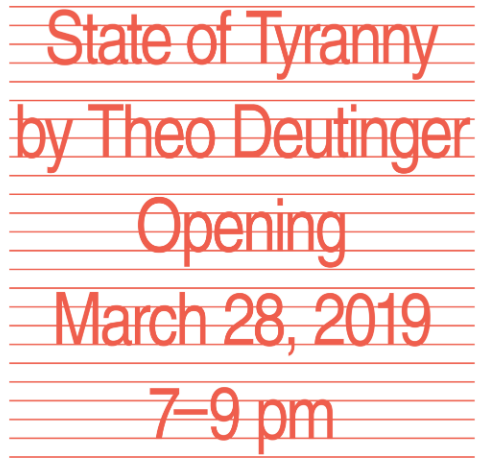 How do we understand tyranny? Its global presence is felt and heard daily. It permeates news cycles, it defines the plots of television shows, and it has to be explained to our children. Tyranny defines contemporary culture, and though it is often talked about conceptually, its more subtle spatial manifestations have a real impact on our cities and public spaces.

Throughout the world, people, communities, and territories are at risk due to the design of the spaces they inhabit. Despite a steady rise in street-level activism, hostile and defensive design have gradually and quietly transformed our buildings, parks, and homes into sites of surveillance and societal control.

State of Tyranny unveils the methods and tools of urban design that seek to disable public agency in the name of public safety. The exhibition reorients our understandings of the power of the city and state-and the architectures they employ-through an installation in Storefront’s gallery space and a series of walking tours through Lower Manhattan called the Tyranny Trail.

Expanding upon research conducted by Theo Deutinger for his recent publication, Handbook of Tyranny, the exhibition and tours call attention to the spatial effects of tyranny, ultimately aiming to identify methods of control commonly used around the world, and to contextualize their embeddedness within New York City’s urban fabric.

State of Tyranny displays seven categories of control and design used in the service of power, from walls and fences to crowd control to prison cells and more. Through objects and tools such as passports and defensive tree plantings, the installation brings to attention to the ubiquity of oppressive design on global and local scales.

Detailed descriptions of the objects–sourced in part from the dry and technical language used by manufacturers praising the efficiency of these tools–gloss over the fact that their purpose is for the direct or indirect harm of human beings. Subdued by their coldness, the descriptions bring awareness to the ways in which design is abstracted through language that serves to normalize and obscure the objects’ inherent power.

Alongside the installation, videos that display particular objects such as skate deterrents and surveillance cameras will underscore the detrimental impacts of their use in public space. By focusing on the micro-scale tools of tyranny and control, State of Tyranny seeks to recontextualize design-based manifestations of power scattered throughout the city, and to highlight to the specific ways in which the culture of tyranny is present in urban and public spaces around the world.

About the Tyranny Trail

The Tyranny Trail situates the objects and tools of tyranny locally, providing a new lens through which seemingly innocuous elements of buildings and neighborhoods are illuminated to participants as directly harmful to collective, communal, and politically active public life.

The Tyranny Trail follows a route through the streets of Lower Manhattan, beginning at Storefront’s gallery space and ending at the World Trade Center Memorial. The trail reiterates and expands upon the examples present in the installation, further conveying their implications for urban development and public use.

The tours, guided by local artists and researchers whose work addresses related issues, will highlight methods of control such as roadblocks, wedge barriers, and other anti-terror measures. Tours will also highlight smaller-scale “quality of life” interventions that are more inconspicuous in our urban context, such as anti-skateboarding devices, anti-homeless bench design, and anti-graffiti paint.

A map of the Tyranny Trail, provided at Storefront’s gallery space, will outline the route and contextualize each stop on the tour, enabling visitors to explore the Tyranny Trail on their own outside of scheduled tour times.

About Handbook of Tyranny

State of Tyranny and the Tyranny Trail are an expansion upon the research conducted for Handbook of Tyranny by Theo Deutinger, which addresses how elements of power are present in both the visual and logistical language of our cities and spaces. Through graphic illustrations, maps, diagrams, and other visualizations, the publication provides insight into the relationship between political power, territoriality, and systematic cruelties.

Theo Deutinger is an architect, writer, and designer of socio-cultural studies. He is the founder and head of TD, an office that combines architecture with research, visualization, and conceptual thinking at all scales, from global planning, urban master plans, and architecture to graphic design and journalism. Deutinger has written about the transformation of urban cultures through the consumption and influence of contemporary media. His work has been published in Mark, Wired, and Domus, and has been exhibited in Future Fictions Z33 (Hasselt, 2014), the Bi-City Biennale of Urbanism/Architecture (Shenzhen/Hong Kong, 2014) and the 2014 Venice Architecture Biennale. Deutinger has held teaching positions at Bauhaus (Dessau), Harvard GSD (Cambridge) and the Strelka Institute (Moscow). Currently, he teaches at the University of Art and Design Linz (Austria) and the Design Academy Eindhoven (Netherlands).