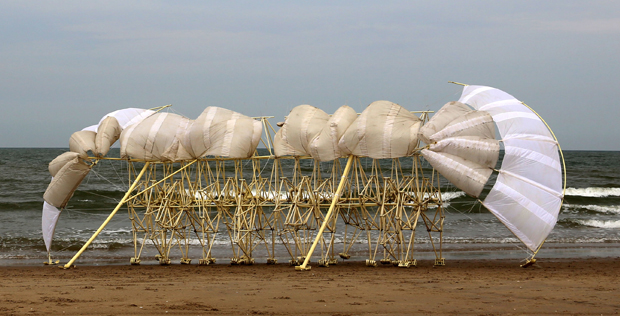 Haute Horlogerie Manufacture Audemars Piguet and the Peabody Essex Museum (PEM) of Salem, Massachusetts are delighted to bring Theo Jansen’s Strandbeests to Art Basel in Miami Beach. From 3-7 December 2014, a clutch of Strandbeests, each with unique characteristics and histories, will inhabit the Miami Beach Oceanfront between 21st and 22nd streets. Daily, visitors will be able to meet Jansen as he leads his larger-than-life, wind-powered creatures in demonstrations along the beach. There will be artist talks and daily public demonstrations of the Strandbeests along Miami Beach to offer close-up encounters and new understanding of these remarkable creations (processions take place daily from December 3-7 at 10:30 AM and 4:30 PM).

This beachside presentation previews the first major U.S. tour of Jansen’s newest Strandbeests organized by PEM. An accompanying installation features Jansen’s newest Strandbeests, including the 42-foot-long Animaris Suspendisse, as well as a reproduction of Theo Jansen’s workshop and an exhibition of Lena Herzog’s photographs of the Strandbeests. This will be complementing Audemars Piguet’s watch exhibition in the Collectors’ Lounge at Art Basel’s 2014 shows, where the brand’s stand was designed by leading French designer Mathieu Lehanneur. 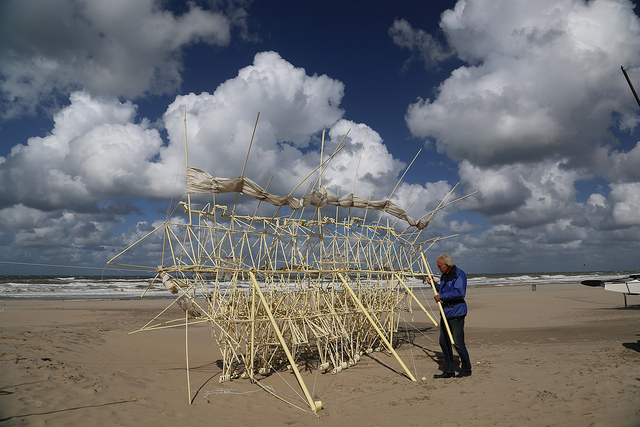 Survival on the beach

Jansen’s renaissance imagination roams freely between the realms of art and science. Possessing an uncanny life-like locomotion, his Strandbeests (“beach animals”) are intricately constructed from PVC tubes, which Jansen refers to as his “artistic protein.” Through 25 years of experimentation and development on the Dutch seacoast, Jansen’s Strandbeests have evolved from rudimentary structures to complex creatures that are able to autonomously respond to environmental conditions by storing wind power, changing direction when they sense water and anchoring themselves during oncoming storms. Each year, Jansen increases the capacity of his Strandbeests to interact and adapt, clearing new hurdles for their sustained survival on the beach.

Jansen’s alternative life forms, with their complex mechanical motions, mirror the precision and technological mastery at the heart of Audemars Piguet’s tradition of watchmaking. Jansen’s creations are constantly updated and taken to new levels of innovation, just as the Swiss watchmaker remains at the forefront of haute horlogerie and is responsible for a number of world firsts in the industry. Providing a compliment to Audemars Piguet’s legacy of integrating creative vision with superb artistry, the Strandbeests illustrate Jansen’s idea that “the walls between art and engineering exist only in the mind”.

Pilgrimages to The Hague

In conjunction with the Strandbeests in Miami Beach, works by the documentary and fine art photographer Lena Herzog will be displayed as tributes to the Dutch artist and his creations. Remarkable works in their own right, the photographs capture the passionate vision at work behind Jansen’s evolving sculptural species. In addition, the exhibition features sketches of the Strandbeests, video footage of the creatures walking the beaches of Scheveningen, an installation of Strandbeest “fossils,” as well as a representation of the Dutch artist’s studio and atelier – all illustrating the meticulous creative process behind Jansen’s complex kinetic sculptures. 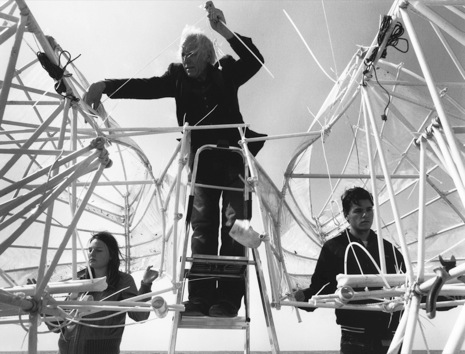 To honor Lena Herzog’s new book, STRANDBEEST: The Dream Machines of Theo Jansen, published by TASCHEN, Audemars Piguet will display a selection of large-scale ink jet and intimate gelatin silver prints by the Los Angeles-based photographer, who, since 2007, has made annual pilgrimages to the beach at Scheveningen in the Netherlands to photograph Jansen and his Strandbeests. In a 2011 New Yorker feature by Ian Frazier, Lena Herzog notes that the Strandbeests “make you think and they make you dream.” The result of years of close study and observation, Herzog’s technically precise photographs capture Jansen’s passionate, creative imagination that roves freely between the realms of art and science. Jansen’s tireless quest for innovation and Herzog’s methodical photographic studies are, at the same time, evocative of the precision and technological mastery at the heart of Audemars Piguet’s watchmaking.

Where art and engineering meet

Commenting on this presentation, Olivier Audemars, Board Member and great-grandson of one of the company founders, said: “We are delighted to be working with Theo Jansen to present his amazing Strandbeests at Art Basel in Miami Beach this year. Jansen’s pursuit of technical perfection and ability to break the boundaries between art and engineering captures the constant dialogue existing between both fields, and this constant interaction lies at the heart of Audemars Piguet’s spirit of independence. We are also pleased to be presenting Mathieu Lehanneur’s innovative lounge design, alongside Kurt Hentschläger’s beautiful film again at Art Basel in Miami Beach 2014.” 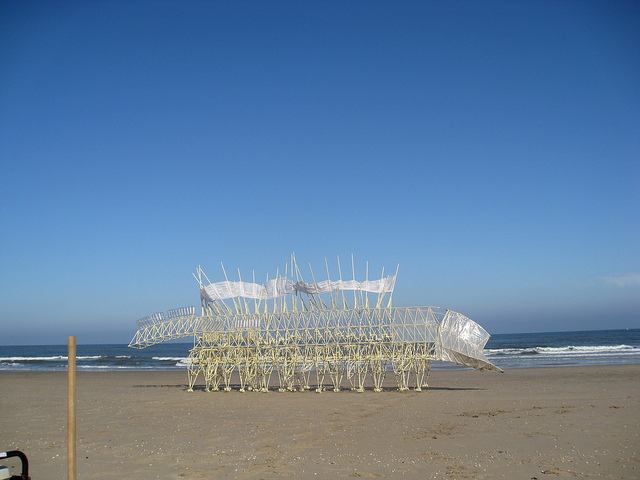 Dan L. Monroe, PEM’s Rose-Marie and Eijk van Otterloo Director and CEO, noted: “PEM is dedicated to creating art and cultural experiences that materially impact people’s lives by expanding their view of themselves and the wider world. As a museum, we are particularly interested in cross-cultural and interdisciplinary forms of creative expression. Theo Jansen’s Strandbeests beautifully express how working at the intersection of fields can give rise to emotionally evocative and innovative art forms.”

“The Strandbeests have captivated a global audience and interest in them has grown at a viral rate. It is with great anticipation and excitement that the Strandbeests will be making their U.S. debut. I’m pleased to be working with Audemars Piguet and PEM to create such an extraordinary welcome for the Strandbeests in advance of their national tour.”

Theo Jansen’s Strandbeests at Art Basel Miami Beach is a special presentation by Audemars Piguet and the Peabody Essex Museum.