Thirsa van Til on |Living and Working |in New York

We sat down with actress Thirsa van Til to discuss her recent performances, upcoming productions, and her overall experiences living in New York

It has been one and a half years since we last interviewed Thirsa van Til, and needless to say she has developed a lot both as an actress and a person. We had the chance to sit down with Thirsa and discuss her recent performances, upcoming productions, and overall experience living in New York. 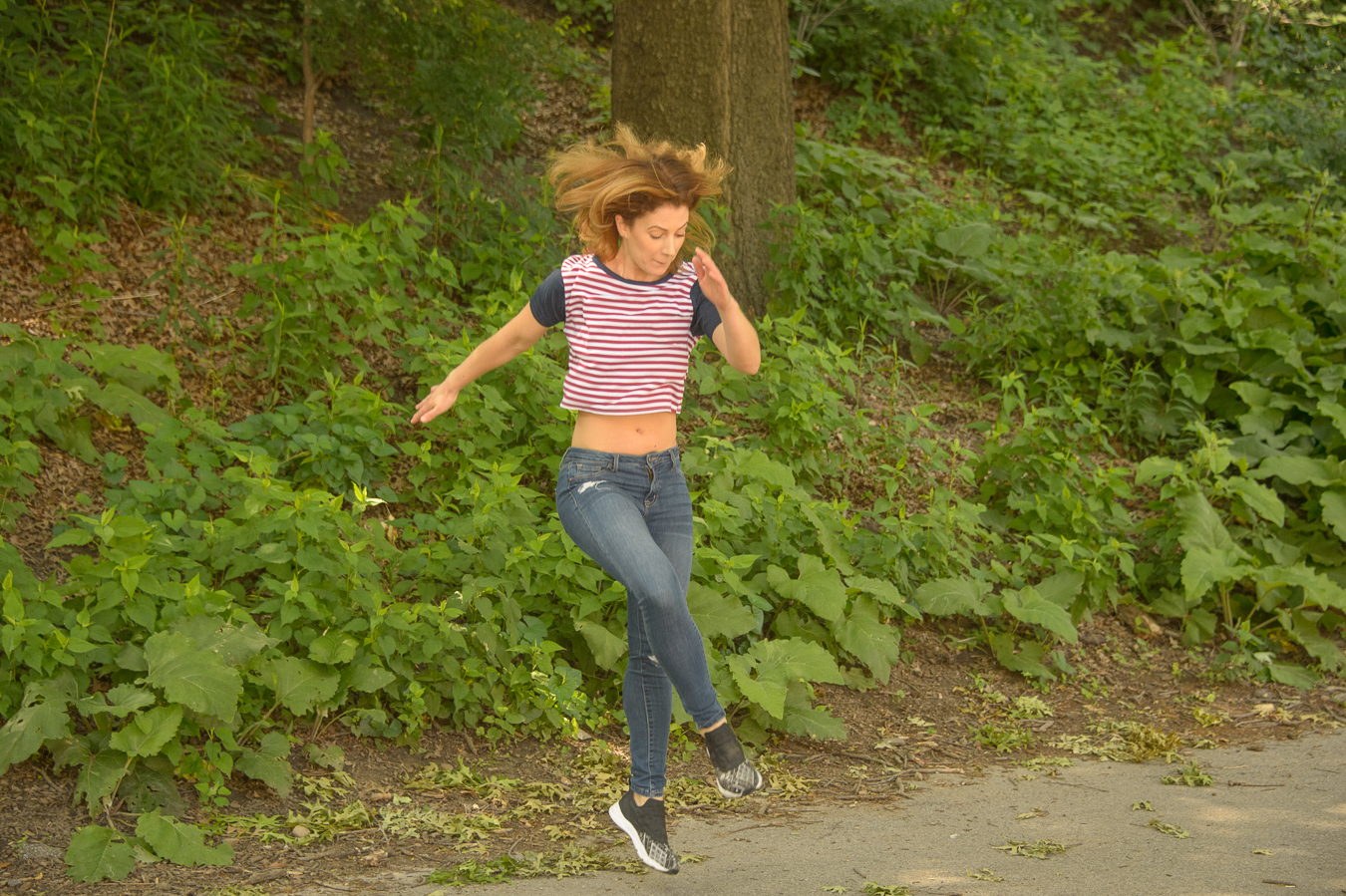 “Living and working in New York so far has been an amazing adventure, because it’s very different from working in the Netherlands.”

The most important thing for an aspiring actress in New York, says Thirsa, is building a solid network and that means getting involved with a wide variety of projects, both in theater and in film. Thirsa tells us there is a big difference between the two, because theater is a live performance with an immediate audience, whereas film takes a long time to process – post-production sometimes takes up to a year or more.

To the question of how she prepared for her role in “Anne Frank Lives!”, a play about a woman who claims to be Anne Frank in 1962 New York, she answered that the difficulty was the weight of the topic. In author Lawrence Kessenich‘s scenario, Anne Frank supposedly survived the concentration camp Bergen-Belsen and it was a challenge to make all of her reminiscing believable on stage. Thirsa told us that she kept on deepening her understanding of both the script as well as Anne Frank’s historic situation by researching factual knowledge and trying to personalize the content. Thereby she strived to reach the essence of the play, allowing her to perform her heavy role even better. 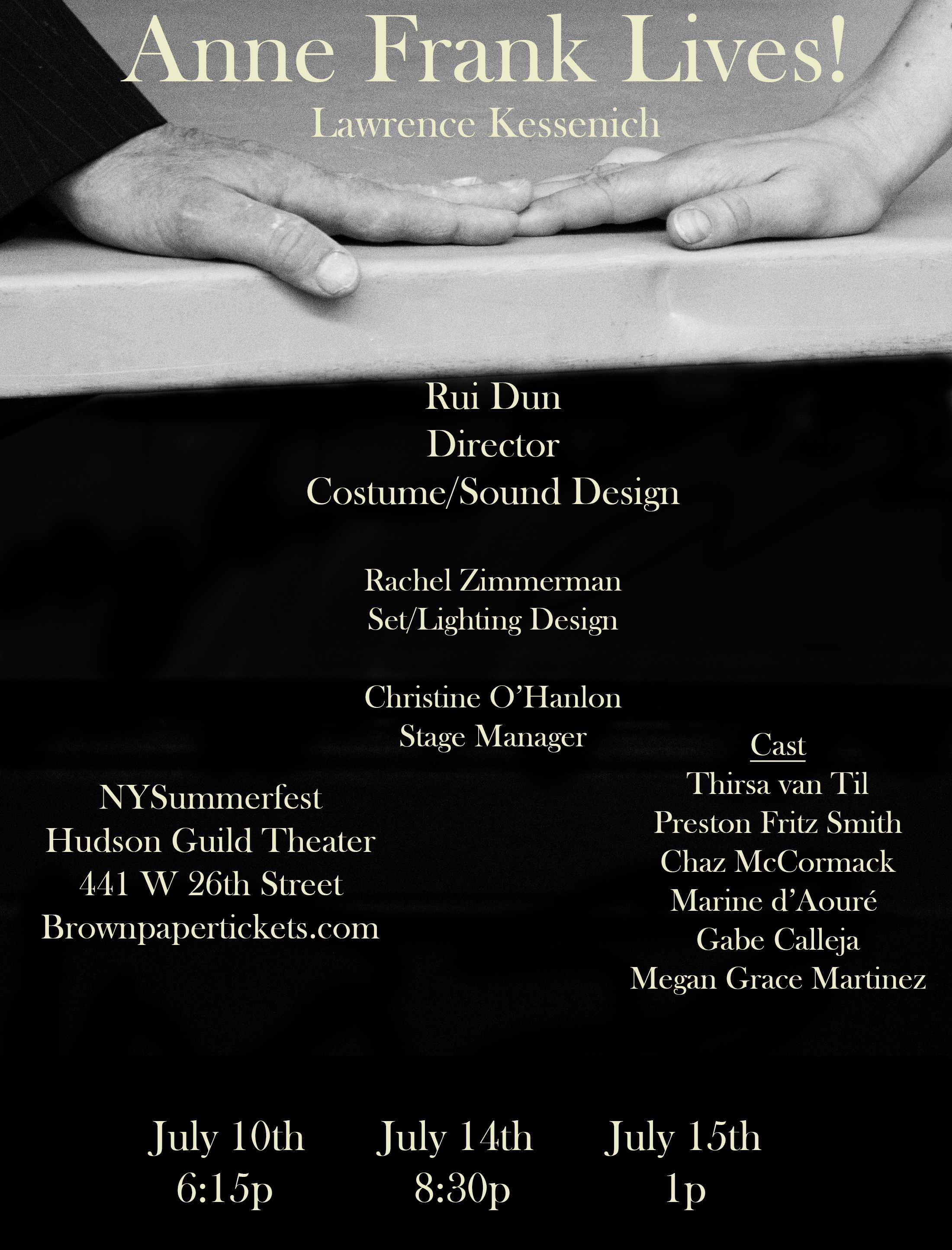 The actress is not exactly a stranger to the theme of WWII: in the past, she worked on large theater productions in the Netherlands: the musical “Soldier of Orange,” the play “Anne” about the life of Anne Frank, and the solo piece “V: Virtue of Victory” (which she performed in New York last year). 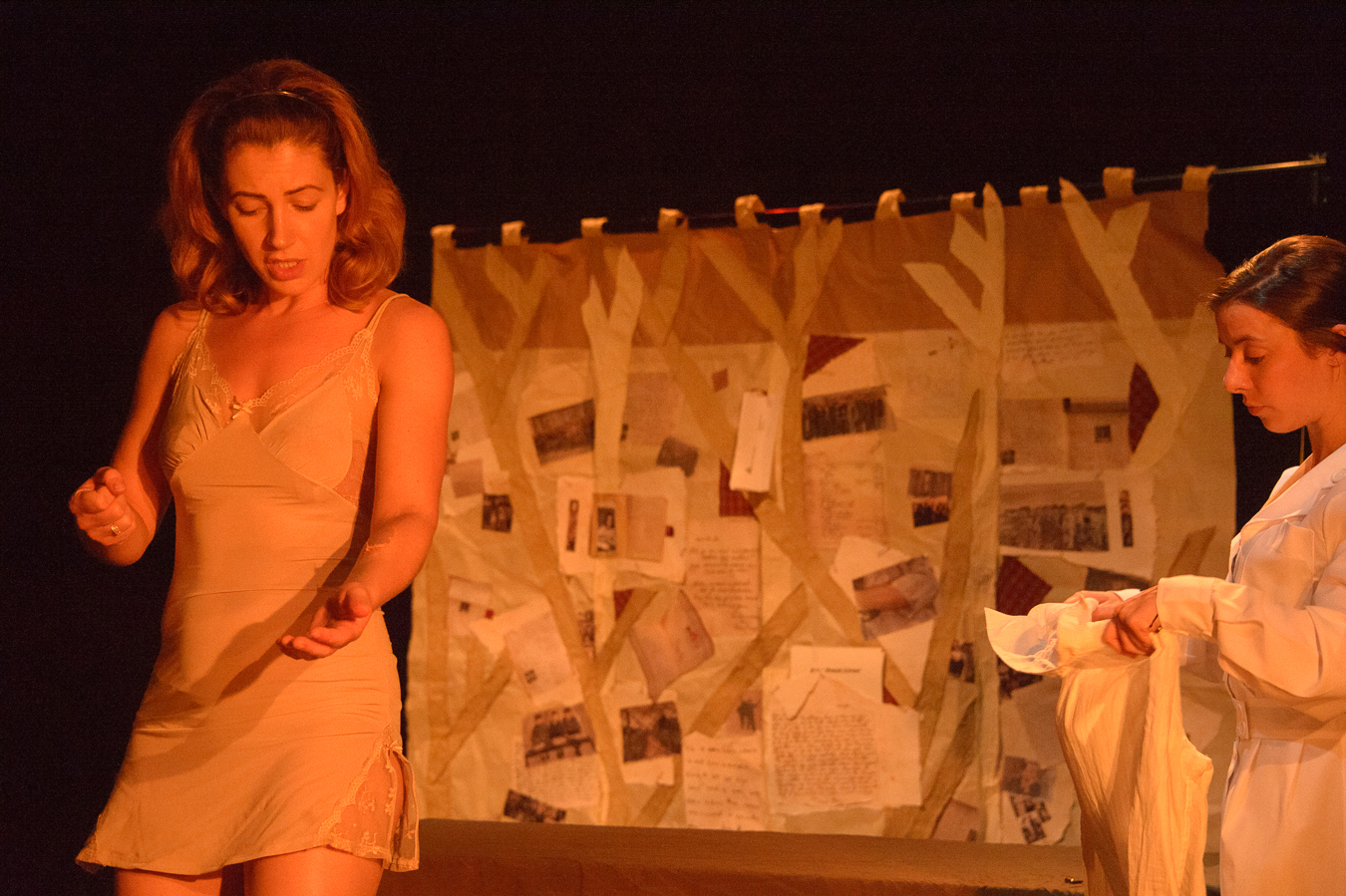 Even though Thirsa worked on multiple films since she moved to New York, her recent performance in “Anne Frank Lives!” was the first time she stood on stage with American actors. She noticed that they were extremely dedicated, professional and grateful for their position, because it’s so hard to get a job due to the overwhelming competition. The theater rehearsals were more pragmatic and business-driven when compared to the Netherlands. “There was very little time and space to discuss the bigger idea of the play and whenever we got together, we worked on blocking.” 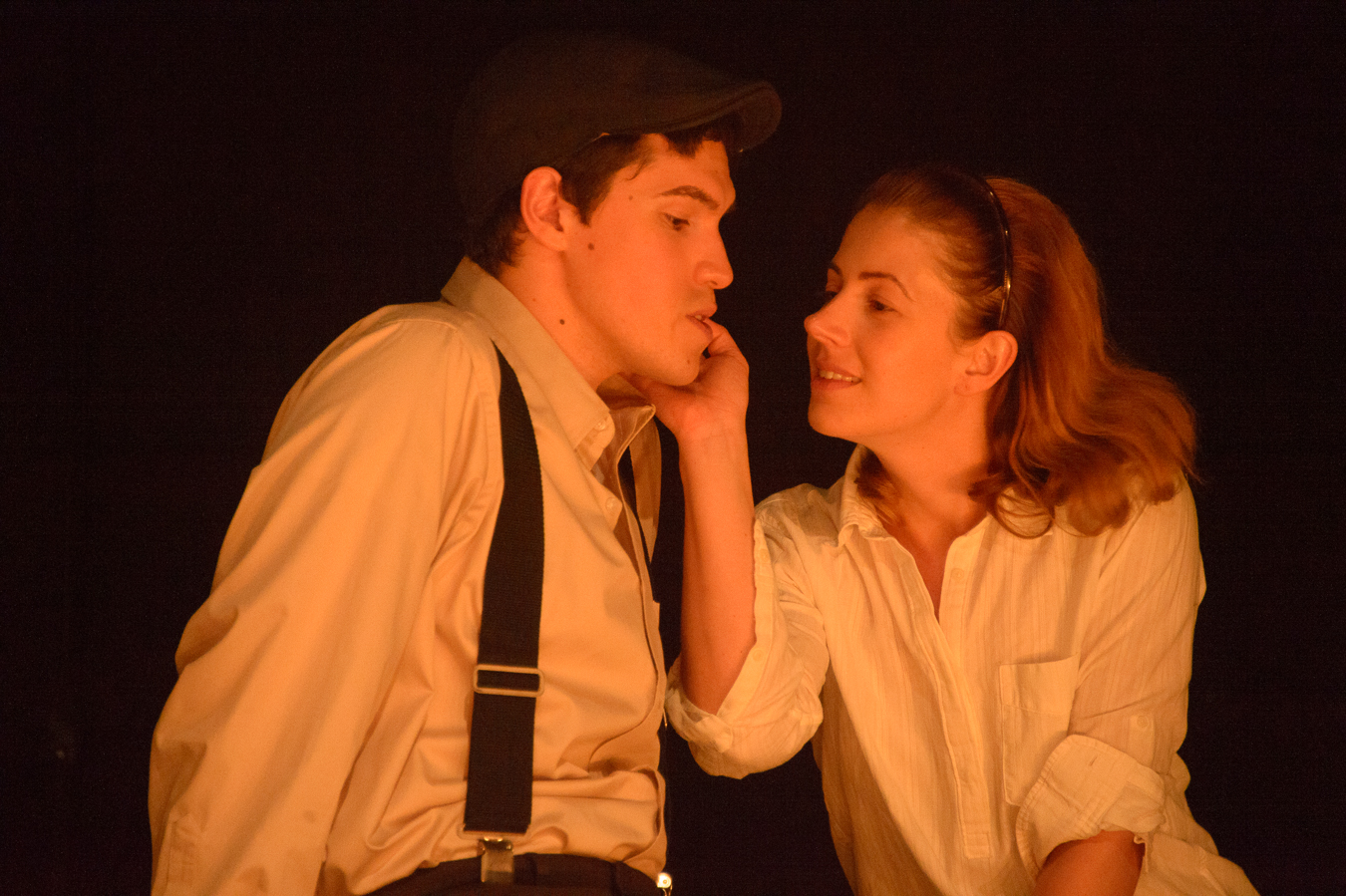 The limited amount of time to rehearse did not show from the performances: the audience’s reception was great, and the turn-up wasn’t bad either. Even on the Sunday performance, right after the World Cup finals, the play managed to have over half of the hall filled. Even though the audience was generally very quiet, Thirsa thrived on the occasional interactive moment between her and them. For example, when in “Anne Frank Lives!” she cried out somewhat delusionally “You guys believe me right?!”, she told us she loved how someone in the audience responded with a soft “yes” under his breath.

Now that “Anne Frank Lives!” is in the past, it is time to look ahead. Thirsa has multiple projects coming up; one of these is a rather dark movie called “Consequential Matters,” which will be released shortly and travel the international festival route. Another film is currently in pre-production and it involves a lot of physical action – a challenge Thirsa is happy to take on. Its release is scheduled for 2020, so in the meantime we can focus on her upcoming comedy film “See You Next Week” by John Painz. The story of how she got the part was an exciting one.

“I saw that John [Painz] was starting a new production, but I didn’t get an audition. So I decided to email him how much I loved his work and that if he had only five minutes left on the audition day that I would love to drop by. Painz responded and said she could do a video-audition instead, which I started working on right away. Weeks after I had sent it I received an email back saying that they liked my video and that they would get back to her as soon as possible. Again weeks later, they invited me to the final audition. The audition went great, we were both just laughing all the time. Right before I left, John said ‘Thirsa!’, so I walked back in and that’s when he asked ‘do you want to play the role?’ and she said ‘yes, of course!’ And so I was hired on the spot!” 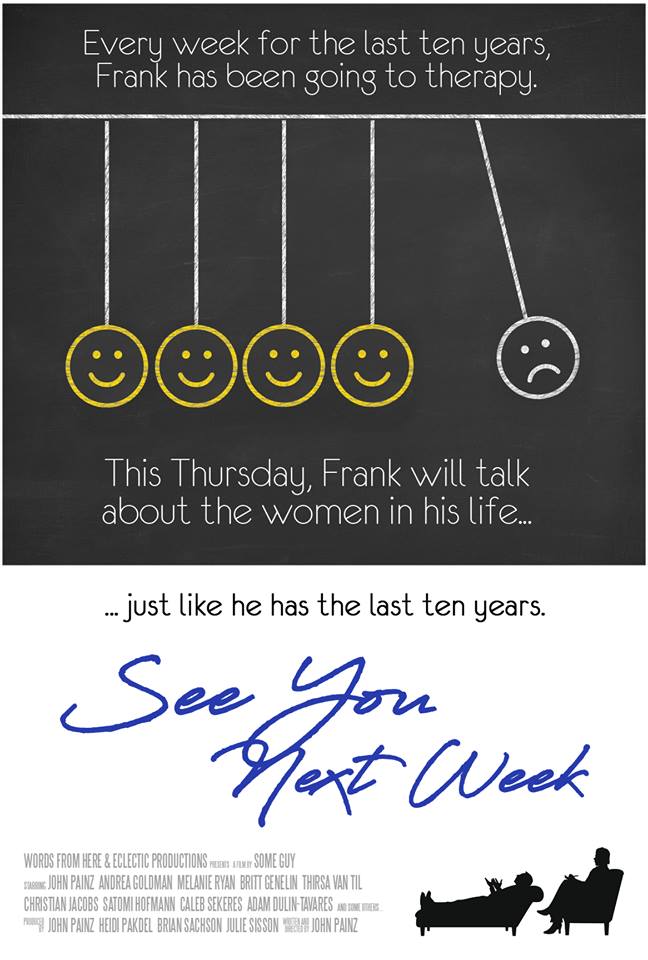 Thirsa is happy to be in a comedy since it’s the reason she started acting as a little girl. Now that she is working on various film projects, she is steering away from theater for the time being. Getting by as an actress in New York requires hard work and tactical decision-making in which job you’re going to go for. “You have to put your whole heart in it, so it is extremely inspiring to see other people working harder and faster because it raises the bar of what’s possible.” On whether she ever takes it slow, she says that “auditioning is working, booking a job is like going on vacation. The downside is that when you wake up and you don’t feel like working, and you listen to that feeling, then you’re already three steps behind.”

This goes to show that Thirsa van Til, after one and a half years, has truly settled in the epicenter of the Performing Arts Industry. She is grateful for all the opportunities that come her way and excited to see where this road may lead to in the future!