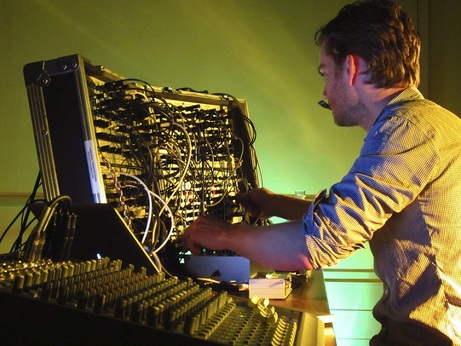 Dutch artist Thomas Ankersmit will premiere new work commissioned by Lampo, a composition for analog Serge modular and digital oscillators that combines a blizzard of microsounds with sculptural fields of pure tone. This project is Ankersmit’s first significant foray into the digital realm and first fully quadraphonic composition.

“A storm and a landscape,” he writes.

Here, the Dutch artist contrasts a sense of overwhelming sound-mass and velocity with near-static tones that trigger additional sounds inside the listeners’ ears, an effect known as distortion product otoacoustic emissions.

Thomas is a composer, musician and installation artist based in Berlin and Amsterdam. Acoustic phenomena such as sound reflections, infrasonic vibration, otoacoustic emissions, and highly directional projections of sound have been an important part of his work since the early 2000s. His music is also characterized by a deliberate misuse of equipment, using feedback and disruptions to the signal, and the extremes of frequency and dynamics, to create visceral but finely detailed swarms of sound. Since 2006 his main instrument, both live and in the studio, has been the Serge analogue modular synthesizer. His recent collaborations include a series of electroacoustic pieces with Sicilian composer and performer Valerio Tricoli; recording sessions with Kevin Drumm at GRM in Paris; and a new Phill Niblock composition for Serge modular synthesizer (Niblock’s first piece for an electronic instrument). Ankersmit has performed twice before in the Lampo series in February 2012 and September 2008.

Founded in 1997, Lampo promotes and supports artists working in experimental music and intermedia, by commissioning, producing and presenting special projects and performances. Lampo brings artists from across the U.S. and around the world to Chicago, and offers the public rare opportunities to experience their pioneering work in person. The organization is equally committed to helping Chicago artists undertake projects with potential impact on their careers.