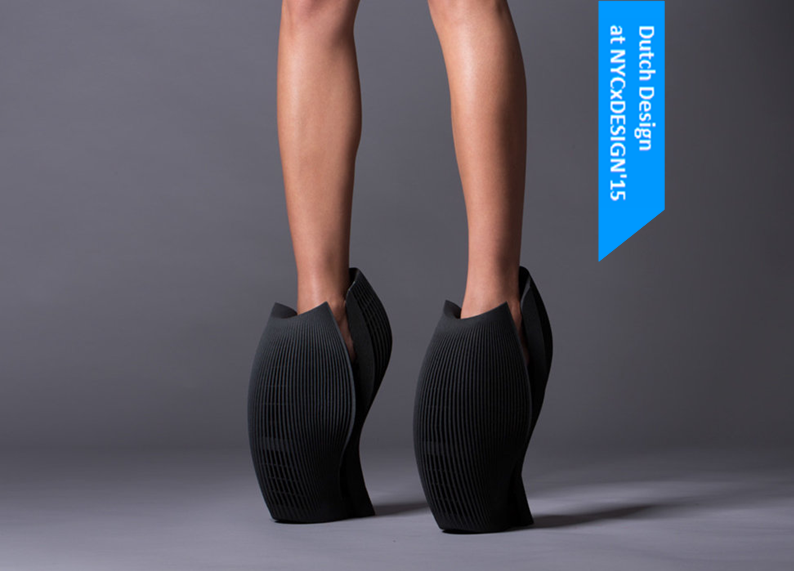 An architectural shoe exhibition highlighting five new and exclusive 3D-printed collaboration shoes from May 9 until June 3.

An architectural shoe exhibition highlighting five new and exclusive 3D-printed collaboration shoes from May 9 until June 3.  United Nude is pushing the boundaries of shoe design with the latest materials and most advanced 3D printing technology.

UNITED NUDE is leading footwear brand, and 3D SYSTEMS – the inventor’s and leaders of 3D Printing, are joining forces for a major collaboration project + exhibition. After its overwhelming success during the Salone del Mobile 2015 (14th – 19th of April), United Nude is bringing the 5x Re-Inventing Shoes collaboration to New York City.

The Re-Inventing Shoes project is about exploring and pushing the boundaries of this rapidly developing technology by creating shoes with the largest amount of sculptural freedom. The production method used is the highest quality of 3D printing (SelectiveLaser Sintering) in a hard Nylon and all-new soft Rubber material. UNITED NUDE have figured out a way to combine harder and softer 3D printed parts for creating fully functioning shoes. Each shoe will be available as a up to 50 pair limited edition.

With the design for UNX2, they wanted to dress the foot in such a way as to make its form partially visible, to highlight the mechanics of the foot and the visual effects that can be created by the shoe in motion.

They were particularly interested in the kinds of images the shoe could create, both when static and when in motion. When the wearer is still, the curve of the foot can be glimpsed within the shoe and the dynamics of movement are suggested by the curving vertical ribbons that envelop it.

However, once the wearer begins to move, shifting levels of transparency are created and the vertical lines create a staccato rhythm reminiscent of early stop-motion photography. The UNX2 shoe creates patterns of movement and produces a dynamic form of image-making through motion.

It was also their intention to make visible the “process” of design in the final object: the digital strategy that was employed when testing the position of the foot within the shoe. So there is a kind of literal transparency, but also a phenomenological transparency that reveals both the process of design and the processes of movement.

The vertical ribbons and the hoof-like shape of the shoe elongate the legs and create an almost animal-like extension.

Ben van Berkel is the Founder and Principal Architect of UNStudio in Amsterdam and Shanghai. He studied architecture at the Rietveld Academy in Amsterdam and at the Architectural Association in London, receiving the AA Diploma with Honours in 1987. UNStudio is a network of specialists in architecture, urban development and infrastructure.
Current projects include restructuring the station area of Arnhem, the design for Doha’s Intregrated Metro network in Qatar, the Raffles City mixed-use development in Hangzhou and the Singapore University of Technology and Design.
Currently he is Professor Conceptual Design at the Staedelschule in Frankfurt am Main and was recently awarded the Kenzo Tange Visiting Professor’s Chair at Harvard University Graduate.