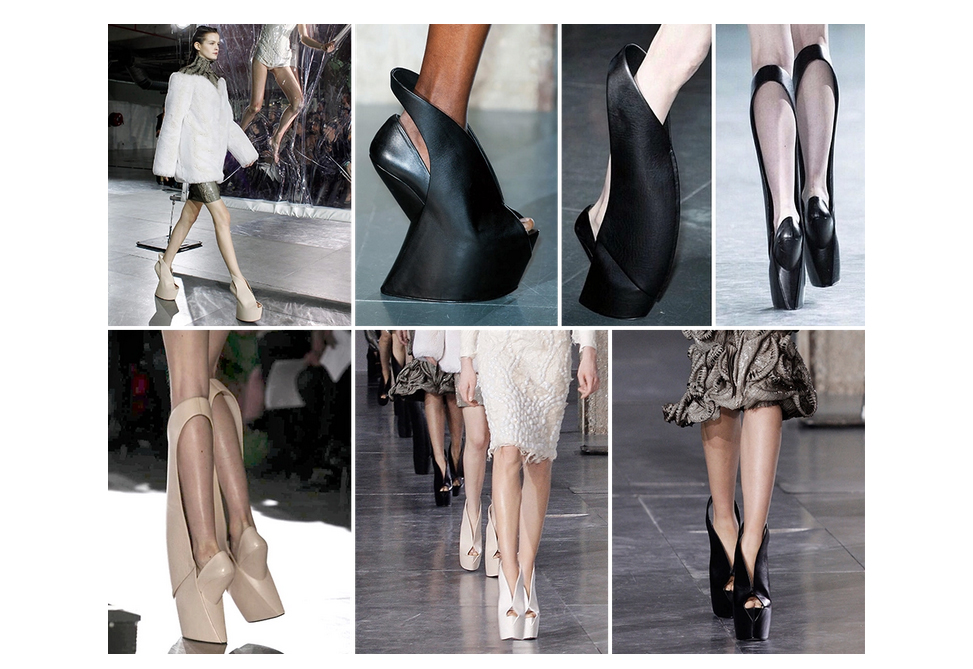 Dutch shoe brand United Nude collaborates with Dutch fashion designer Iris Van Herpen for shoes completing her collection for its 9th consecutive time. Nevertheless this is the first time that two instead of just one design graced the runway, in the form of the Biopiracy Boot and the Biopiracy peeptoe ankle Bootie, both on staggering 7 inch tall platform cantilevered heels. For Van Herpen’s Autumn Winter 2014 collection titled Biopiracy, the designer and United Nude worked together on two footwear designs. The futuristic boots curve up and around the leg, encompassing the lower leg on both sides and looping behind the knee. A long seam runs up the front of the upper before it opens at the top, while the back of the calf is left exposed. Seven-inch-high heels cantilever from the back of the solid base, which continues the shape of the upper to the ground. A peep-toe boot was also created in a similar style, but with a strap that wraps around the leg at ankle height instead of at the knee. Black, cream and white leather was used for the designs, complimenting the colours of Van Herpen’s garments.

The Biopiracy collection by Iris Van Herpen emerged from astonishment of companies’ patented human genes. As part of the show, Lawrence Malstaf created art installations, which developed the impression of models being weightless and breathless. In their half-sleep they seem bio-hacked, to slow down time and energy. Iris van Herpen and Lawrence Malstaf experiment with living objects, kinetic architecture and physical interaction through fashion in installation art. A 3D printing collaboration with Julia Koerner and Materialise fuses the artisanal with the technical to create a kinetic dress which dances as it amplifies bodily movement. The Iris Van Herpen × United Nude Boot overrules the natural shape of the foot; this makes the graphically leather moulded boots futuristic sculptures extending the legs with a new silhouette into motion. Iris Van Herpen and United Nude is a match made in heaven from day one, as they are
both not afraid of breaking boundaries by experimentation with design and technology. A VIP United Nude Sample Sale will be held on April 7 until April 12, from 9am to 7pm.

Shop a large selection of women and men shoes at up to 80% off retail before the sale opens to the public.