From December 9 until March 6, the Norton Simon Museum in Pasadena will have Van Gogh's Bedroom on loan from the Art Institute of Chicago

From December 9 until March 6, the Norton Simon Museum in Pasadena will have Van Gogh’s Bedroom on loan from the Art Institute of Chicago. This installation of Vincent van Gogh’s tender and intimate Bedroom from 1889 is a highlight of the Art Institute of Chicago’s superb 19th -century collection. A meditation on friendship, hope and crushing disappointment, Van Gogh’s Bedroom serves not only as a kind of self-portrait, but also as a symbol of the artist’s wandering existence and search for an elusive sense of repose. The second of three versions of the interior scene, the Chicago Bedroom, was painted by the artist while at the asylum of Saint-Paul-de-Mausole at Saint-Rémy-de Provence, France, in September 1889. Its installation at the Norton Simon Museum marks the first time the painting has been on view on the West Coast, and it will hang in the Museum’s 19th -century art wing, surrounded by the Simon’s own important collection of Van Gogh works.

In his brief life of only 37 years, Vincent van Gogh sought a place to call home in four countries and 37 residences. In only one of these did he find something approaching contentment: his leased rooms at No. 2 Place Lamartine in Arles, the so-called ‘Yellow House’, where he dreamed of establishing a ‘Studio of the South’. He painted his bedroom for the first time in autumn 1888 (today in the Van Gogh Museum), having spent two days confined to his bed by a fit of exhaustion. In a letter to his brother, Theo, Vincent explained: “I had a new idea in mind… This time it’s simply my bedroom, but the color has to do the job here, and through its being simplified by giving a grander style to things, to be suggestive here of rest or of sleep in general. In short, looking at the painting should rest the mind, or rather, the imagination. The walls are of a pale violet. The floor, is of red tiles. The bedstead and the chairs are fresh butter yellow…”. The artist’s specific interest in the decoration of his home betrayed nervous excitement in anticipation of Paul Gauguin’s arrival the following week. Already a friend, competitor and artistic idol for van Gogh, Gauguin was to be his collaborator at last, to live and work by his side in the Yellow House. The violet walls, the butter yellow chairs and bedstead, the selection of portraits on the wall in the bedroom: these were all carefully chosen with Gauguin’s future residence in the adjacent room in mind. The dream of a shared Studio of the South, however, proved short-lived, descending before the year was out into a nightmare, when Van Gogh experienced a nervous breakdown in late December and presented a severed portion of his own ear to a local prostitute. In and out of the hospital at Arles through the spring of 1889, Van Gogh admitted himself to the asylum of Saint-Paul-deMausole at Saint-Rémy-de-Provence in early May. It was there, the following September, that he undertook the second and third versions of his Bedroom, today in the Art Institute of Chicago and the Musée d’Orsay in Paris, respectively. Both were adapted from the original canvas, which had sustained 3 serious water damages in a flood at Arles. As he copied the damaged Bedroom in his asylum studio at Saint-Rémy, the hopeful moment that picture had once captured must have seemed far away to van Gogh. Yet the second version, that will be on loan in Pasadena, is more startlingly vivid than its predecessor, its colors more vigorously contrasted, its surface more thickly covered in paint. Hoped for, lost, and longingly remembered, the peaceful scene here rematerializes with the intensity of a fever dream. 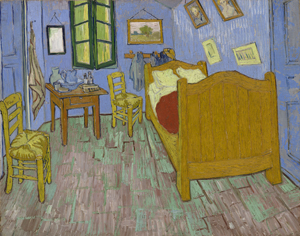 On January 7 (4:00-5:00 PM), Gloria Groom, Chair of European Painting and Sculpture at The Art Institute of Chicago will visit Pasadena for the lecture ‘Van Gogh’s Bedrooms: Making and Meaning’, where she will discuss the significance of the motif for the artist’s life and what can be learned from the documentary, scientific and physical evidence pertaining to all three versions of this painting.

On January 13 (5:30 PM), the museum will screen ‘Vincent & Theo’ (1990), centring on the relationship between Vincent van Gogh and his brother, Theo. Vincent’s works are ignored during his lifetime, despite the best efforts of Theo, a struggling gallery owner. When Theo fails to make a profit from his brother’s work, he finds himself torn between art and commerce, a conflict deepened by Vincent’s increasing emotional neediness. Soon the situation worsens, and both brothers are forced to struggle with depression and madness.

On February 25 (4:00-5:00 PM), Axel Rüger, the director of the Van Gogh Museum in Amsterdam will visit Pasadena for the Lecture ‘From Unrecognized Genius to Global Icon: Vincent van Gogh Then and Now’: Today Vincent van Gogh is one of the most famous, if not the most famous artist in the world. Every time something momentous happens such as the discovery of a lost or unknown work or the recovery of a stolen work, it is at once global news. It is a well-known fact that during his lifetime Van Gogh only sold one painting and otherwise remained known only to a small circle of friends. Rüger traces the artist’s short career to remind us of his enormous achievements as a painter and draughtsman, and then describes the artist’s road to fame, the heroic role a female family member played in this and what this means for the museum that deals with the artist’s legacy now, the Van Gogh Museum in Amsterdam.

On February 26 (1:00 PM), the museum organizes a tour that explores the intimacy of Van Gogh’s ‘The Bedroom’ captured in other works from the collection: Gabriel Metsu’s Woman at Her Toilette, Watteau’s Reclining Nude, and Renoir’s At Renoir’s Home, rue St.-Georges (formerly The Artist’s Studio, rue St.-Georges).

About the Norton Simon Museum

The Norton Simon Museum is known around the world as one of the most remarkable private art collections ever assembled. Over a 30-year period, industrialist Norton Simon (1907–1993) amassed an astonishing collection of European art from the Renaissance to the 20th century, and a stellar collection of South and Southeast Asian art spanning 2,000 years. Modern and Contemporary Art from Europe and the United States, acquired by the former Pasadena Art Museum, also occupies an important place in the Museum’s collections. The Museum houses more than 12,000 objects, roughly 1,000 of which are on view in the galleries and gardens. Two temporary exhibition spaces feature rotating installations of artworks not on permanent display