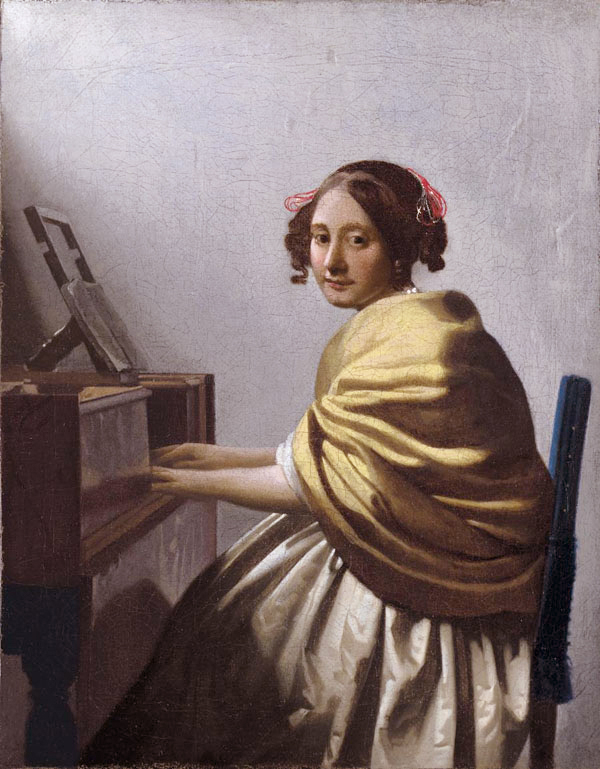 Vermeer’s Young Woman Seated at a Virginal and two additional loans from the Leiden Collection are on view at the Philadelphia Museum of Art.

Vermeer’s Young Woman Seated at a Virginal and two additional loans from the Leiden Collection are on view at the Philadelphia Museum of Art.

Vermeer painted less than forty pictures during his career and this one, Young Woman Seated at a Virginal, is believed to be one of his last. It is also the only remaining canvas by this great Dutch master to be in private hands.

It has been almost ten years since a painting by Vermeer has been on view in Philadelphia. Scholars have long known about this picture but have disagreed about who made it. Scientific and art historical studies undertaken in the 1990s and after, however, have shown Vermeer to be its creator. Recent analysis has provided further proof, finding that its canvas is from the same bolt of cloth that Vermeer used for his famous Lacemaker, which today hangs in the Louvre. This rendering of a solitary woman is quintessentially Vermeer. He stripped the scene to its essence; the light that beams in from the left defines the forms and provides volume, but he abstracted the back wall, the woman’s arms, and even her facial features. In typical Vermeer fashion, the portrayal does not let us know what the woman is thinking or how the depicted moment might fit into a narrative. Her silk dress, the lace ribbons in her well-coiffed hair, and the luxurious keyboard instrument at which she sits mark her as a woman of considerable means. It is only her gentle outward glance that bridges the distance between her own psychological space and that of those of us who are lucky enough to encounter her, and this painting. Vermeer’s Young Woman Seated at a Virginal is joined by two additional loans from the Leiden Collection: Frans Hals’s Portrait of Samuel Ampzing and The Coat of Many Colors attributed to Rembrandt’s pupil Gerbrand van den Eeckhout.

All three paintings are on view in the galleries of European art 1500–1850 on the second floor, in the company of a selection of the Museum’s own paintings from the Dutch Golden Age. The Museum possesses more than three hundred seventeenth-century Dutch paintings, the largest collection of its kind in North America.