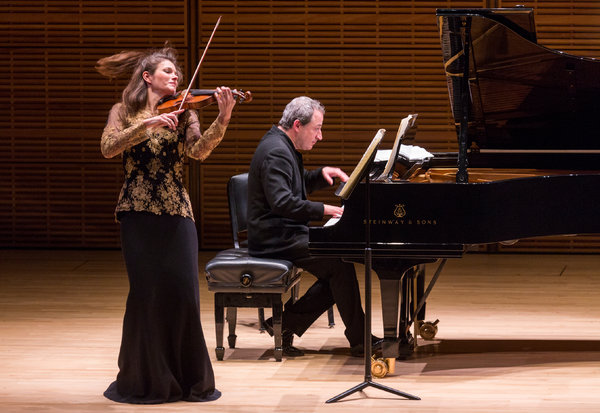 Janine Jansen returns to the stage in radiant form

The New York Times featured a praising review of Jansen’s peformance stating that “She was back, in radiant form,… which proved that she is an artist worth the wait”, just like “Ms. Jansen’s full-bodied, polished-wood sound”

Violinist Janine Jansen plays fiery virtuosic works of Ravel and Prokofiev with pianist Itamar Golan; music by two composers not closely associated with chamber music. Prokofiev said his Violin Sonata No. 1 was ‘serious in mood,’ and asked the violinist to sound like ‘wind in a graveyard’ in a first-movement passage. But the sonata’s mysterious third movement and wild finale is hardly gloomy.

Ravel’s Violin Sonata is noteworthy for its second movement Blues, considered by the composer to be a Frenchman’s view of American Jazz. Ravel’s interest in Hungarian culture inspired Tzigane, a fiery virtuoso showpiece that vividly captures the essence of the gypsy musical spirit.

A violinist with an enviable international reputation, Janine Jansen works regularly with the world’s preeminent orchestras, including the Royal Concertgebouw Orchestra, Berliner Philharmoniker, and New York Philharmonic. She was the featured artist at the 2014 BBC proms, culminating in an appearance at the world-renowned Last Night of the Proms.