Visit Theo Jansen’s Strandbeests at the Exploratorium this Summer!

From May 27 until September 5, the magical and famous Strandbeests of Theo Jansen will be exhibited at the Exploratorium in San Francisco.

From May 27 until September 5 the West Coast audiences will have a unique opportunity to see and experience the global phenomena known as Strandbeests (“beach animals”), at the Exploratorium in San Francisco. Strandbeests are the wind-powered creatures, designed and created by Theo Jansen, that blur the lines between art, science and engineering. Open Memorial Day through Labor Day weekends.

About Strandbeests: The Orgin Of The Species

Jansen’s Strandbeests—“beach animals” in Dutch—are enormous, self-propelling kinetic creations. Constructed largely of PVC tubing and other hardware store materials, Strandbeests are mesmerizing in their motions and eerily lifelike. Equipped with sensory organs and ever-evolving survival strategies, they walk a wandering, wind-blown line between art and engineering, mechanics and biology. The exhibition, organized by the Peabody Essex Museum (PEM), is the first large-scale museum presentation of Jansen’s Strandbeests in the Americas. The Exploratorium serves as the exclusive West Coast venue. 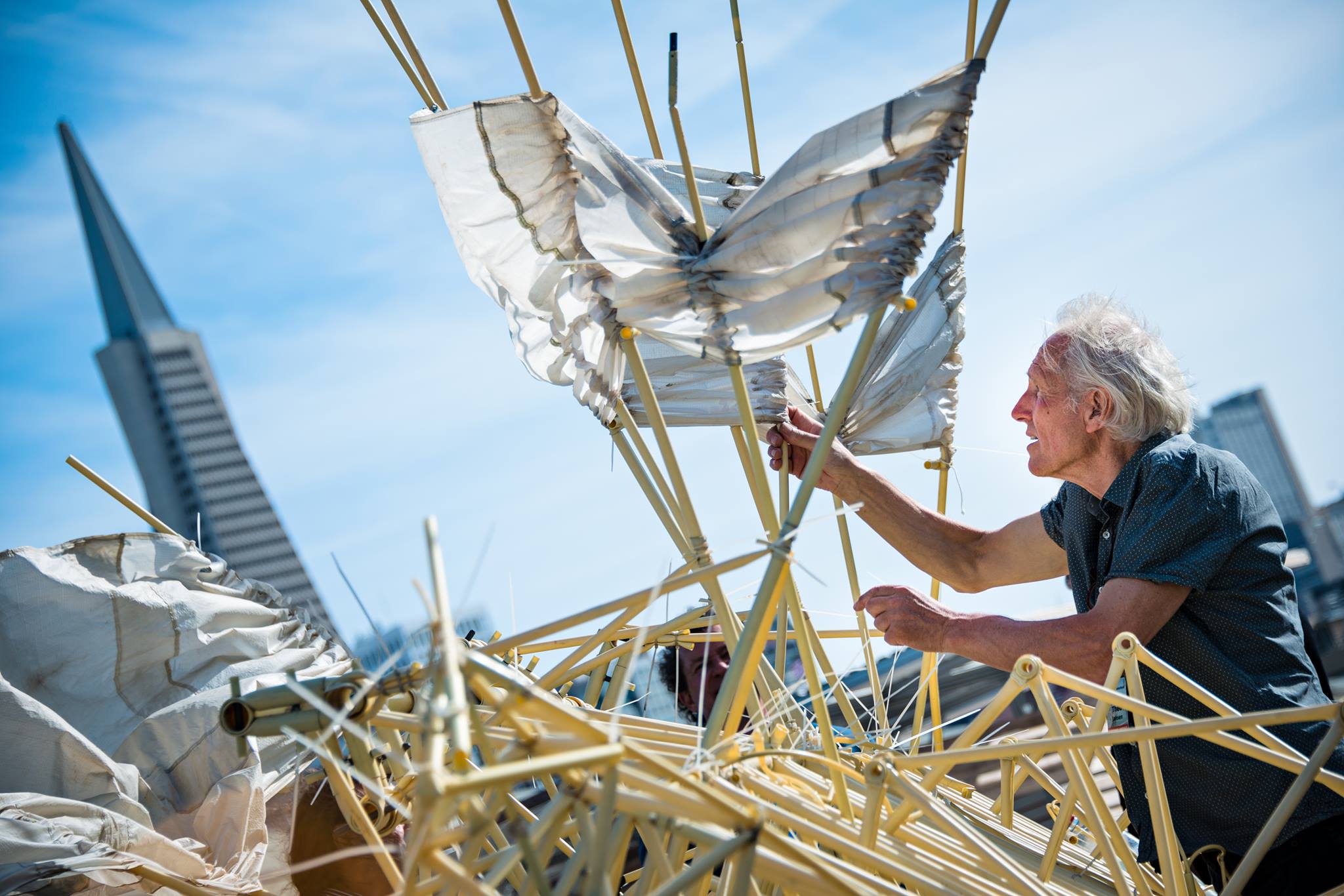 As the wind rises on Scheveningen Beach in the Netherlands, Jansen’s Strandbeests spring to life. Pistons, crankshafts and complex leg systems – all rendered from humble PVC tubing and zip ties – begin their symphonic movement across the seaside expanse. Drawn to the hauntingly elegant locomotion, crowds gather to watch Jansen tend his Strandbeests and share in his wonder as the creatures animate with every breath of wind.

With a singular focus and sense of play, Jansen has developed his Strandbeests from rudimentary structures into intricate, autonomous creatures that can respond to environmental changes by storing wind power, anchoring against oncoming storms and tacking away from the water’s edge. Originally inspired by the threat of rising sea levels, Jansen imagined a mechanical creature that could pile sand back up on the dunes. As time went on, Jansen became more fascinated with exploring ideas around the origins of life.

An annual rhythm structures the Strandbeests’ life cycle. Innovations are imagined and explored in the studio in winter, then tested and adapted on the beach in summer. Each new species of Strandbeest boasts new tactics and adaptations for their seaside survival. By fall, the creatures have outlived their evolutionary use and become part of Jansen’s fossil record. Like evolution itself, this process is ruthless, searching and unending.

In total Theo created six different beests, with the lastest work from 2014, the 43-foot-long Suspendisse, and will also visible at the Exploratorium exposition. 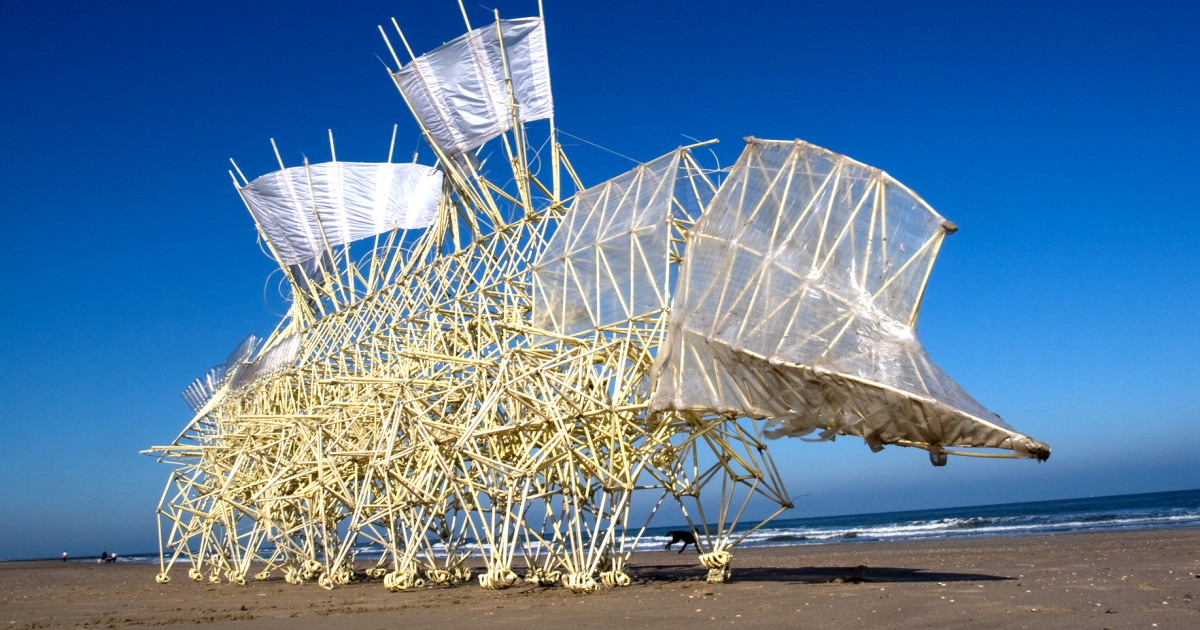 Constructed largely of PVC tubing and other hardware store materials, Strandbeests are mesmerizing in their motions and eerily lifelike. Equipped with sensory organs and ever-evolving survival strategies, they walk a wandering, wind-blown line between art and engineering, mechanics and biology.

Physicist-turned-artist Jansen has been creating Strandbeests since 1990. Iteratively designed and intricately assembled, Jansen’s self-propelled creatures have evolved over the years, becoming increasingly complex and lifelike, with specialized adaptations to help them survive in their seaside environment.

On tour for the first time in North America, the exhibition is illuminated by artist sketches, immersive video, live demonstrations, and the lyrical photography of Lena Herzog,who spent more than seven years documenting the strandbeests’ evolution. 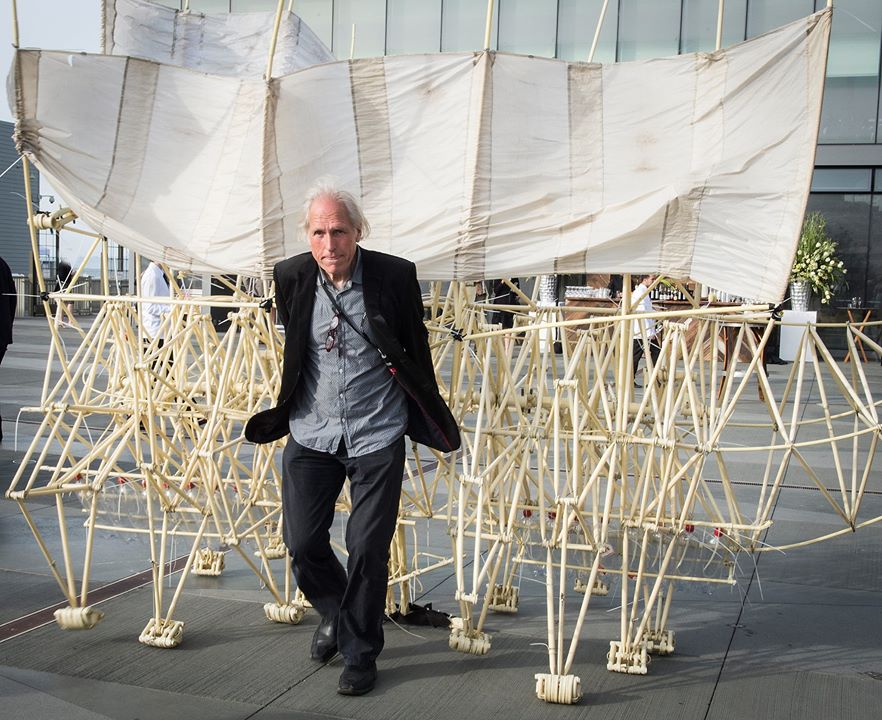 The artist first came to prominence in 1980 when he flew a “UFO” across the skies of Delft, Holland. For the past 20 years Jansen has been creating and exhibiting his dramatic Strandbeests. He has appeared on multiple TED Talks, been the subject of a profile in The New Yorker and shown his work in Asia, Europe and now the United States. A trained physicist, Jansen’s Strandbeests bridge the gap between art and engineering, attracting a broad array of followers: from engineers, biologists and philosophers, to environmentalists, writers and makers. Each generation of his “Strandbeests” is subject to the forces of evolution, with successful forms moving forward into new designs. Jansen’s vision and long-term commitment to his wooden menagerie is as fascinating to observe as the beasts themselves.

“Normally evolution has millions of years to take place but I may only have another 20 years to work,” said Jansen. “I am always dreaming about the future of the Strandbeests. By the time I leave the planet, I want to leave a new species for you.”