“Waiting For Giraffes” at Other Israel Film Festival

On November 7 the documentary “Waiting For Giraffes” by Marco de Stefanis will be screened at the Other Israel Film Festival at JCC Manhattan in New York.

Dr. Sami is the veterinarian at Qalqilya Zoo, which is in the west of the West Bank, close to the border with Israel. It’s not easy to work in the only zoo in the world in occupied territory. The giraffes died during the last intifada, and replacing them is proving to be a real challenge. Animals that are “surplus to requirements” are sometimes available from foreign zoos, but never a giraffe. Everything in Palestine is related to politics, even something as innocent as a zoo. The zoo’s collaboration with the nearest Israeli zoo gives a good impression of the cross-border relations. We follow Dr. Sami’s quest for international recognition and watch as he makes friendly overtures to his Israeli counterparts. On a working visit to the zoo in Jerusalem, the zoo’s staff realize how far they are from even reaching the minimum standards. This rude awakening triggers Dr. Sami to push for the necessary improvements. 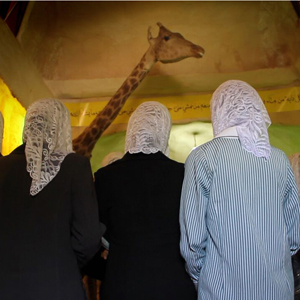 About Other Israel Film Festival

Founded in 2007, the Other Israel Film Festival presents high-quality cinema that inspires conversation and takes a deeper look into Israeli and Palestinian societies, as well as other minority populations in Israel. The festival explores themes relating to human stories and social justice challenges for Israel and its neighbors. The goal of the festival is to use film as a catalyst for a dynamic and inclusive forum for the exploration of, and dialogue about Israeli and Palestinian societies.  With our partners, we aim to engage our community, deepen its view, challenge its perspectives, and drive it to action.

The Other Israel Film Festival uses film to foster social awareness and cultural understanding. The Festival presents dramatic and documentary films, as well as panels and events about history, culture, and identity of minority populations in Israel with a focus on Arab/Palestinian citizens of Israel, who make up twenty percent of Israel’s population.