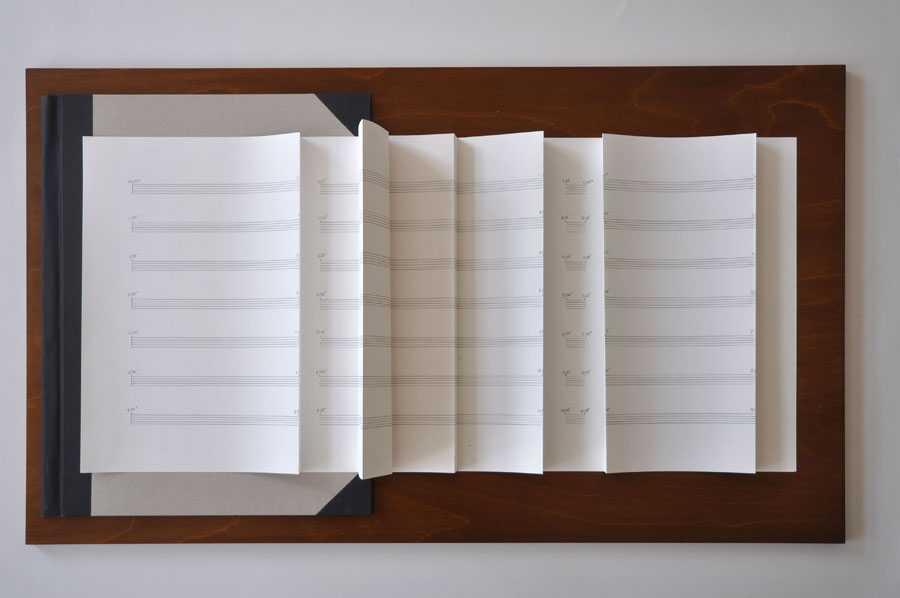 The Drawing Center presents William Engelen: Falten, an exhibition of a new series of musical scores by the artist, and performance with Talujon, November 21, 2013 - January 14, 2014

From November 21, 2013 until January 12, 2014 The Drawing Center will present William Engelen: Falten, an exhibition of a new series of musical scores for percussion by William Engelen. Falten [Folds] build musical compositions from folded paper. At the start of each composition, Engelen draws a time line on a sheet of paper. Each centimeter of paper corresponds to one second in the score. The artist shapes the paper into three-dimensional forms—ovals, cones, or even knots. He then hand-draws a staff notation on the sections of the paper that are not hidden in the folds. Through this structure of creases and lines, Engelen organizes, through both intention and chance, the elements of sound and silence in each piece. The landscape of the paper determines the music that can be made from it. Opening reception: Thursday, November 21, 2013 from 6-8pm. See details here.

In performing Falten, musicians “walk” through this architectural landscape, using the paper’s planes, heights, and structures as parameters for qualities in volume, pitch, rhythm, tension, character, and the spatiality of sound. The lines on the page and resultant folds manifest the score as an intricate drawing. Falten for Percussion consists of eight parts, and will be debuted by the celebrated percussion ensemble Talujon.