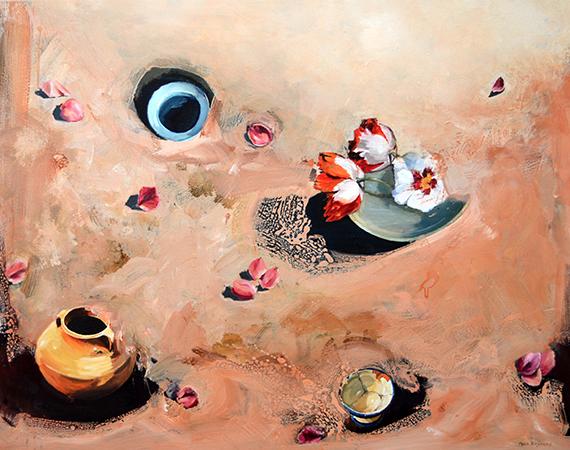 December 4 until January 10, work by Dutch painter Toon Kuijpers is on view at Howard Scott Gallery

December 4 until January 10, work by Dutch painter Toon Kuijpers is on view at Howard Scott Gallery.

About the exhibition ”From the Source”

Howard Scott Gallery announces the opening on Thursday, December 4, of an exhibition of recently completed paintings “From The Source” by the Dutch painter Toon Kuijpers. The exhibition will continue through January 10, 2015. Kuijpers recent works are structural in a manner to equate the flat tabletop site of traditional still life painting with not only the considerably more vast space of depicted landscape, but also with the rectilinear field of an abstract canvas.

In admired chapters of work leading up to the paintings which will compose this exhibition, Kuijpers sets discreet, schematic [and often enigmatic] shapes which evoke the time-honored vessels, plates and other domestic objects of classicnature morte within a fluidly painted arena, in which the viewer’s perception of palpable space is weighted against the painter’s mark-making to establish the actuality of the flat surface. It has been remarked that -in these works- the artist was both paying homage to his illustrious ancestors in Dutch painting, while at the same time engaging the important discourse on the continuing evolution of painting. His curious and very individual approach to color remains a distinctive aspect of the work. In these recent paintings, his affection for a realm of grays interspersed with a range of earth tonalities [tans extending into deep browns] is evident. Smokey blues of medium and darker values dominate several paintings. 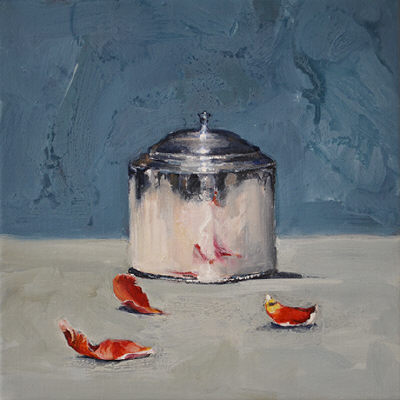 In her insightful review for Art in America of an earlier solo exhibition, the critic and author, Eleanor Heartney closes by commenting that “Kuijpers’ paintings wear their intelligence lightly. One is initially seduced by the sheer painterly beauty of the canvases. Only gradually comes a recognition of the larger commentary on art and representation that’s being gradually offered. One wishes that the lessons of art were always administered so pleasurably.”

Toon Kuijpers works is in many private and public collections in the United States and Europe including IBM (NY), the Prudential Insurance Company of America (NY), Phillips Research Eindhoven, Gemeente Museum, Den Haag, and The Netherlands Rijksmuseum Twenthe.