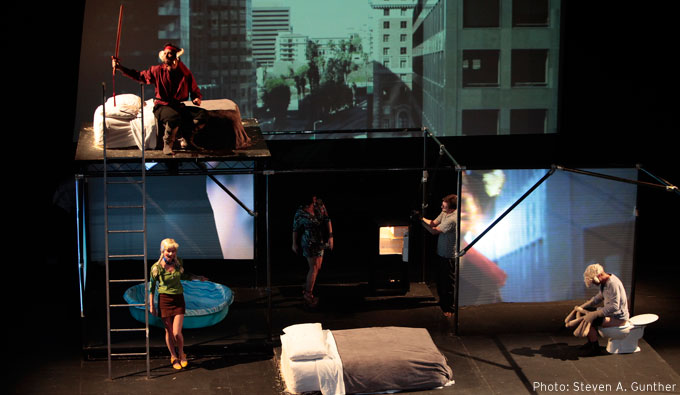 From 11-14 Nov, Wunderbaum plays the New York premiere of 'Looking for Paul'

From 11-14 Nov, the Dutch theater group Wunderbaum plays the New York premiere of ‘Looking for Paul’ at New York Live Arts. You will get a discount on your tickets when you use the code dutch15. TICKETS

About ‘Looking for Paul’

Rotterdam based performance gang Wunderbaum is pulling no punches in their highly anticipated New York premiere. It’s Inez van Dam vs. Kabouter Buttplug, the notorious sculpture by infamous artist Paul McCarthy. Inez lived a simple, serene life in Rotterdam until the installation of the so-called “Buttplug Gnome.” Inez thinks this work of public art is ruining her street, her very life, and she’s heading to Los Angeles to track down McCarthy and take revenge. But can this defiant citizen defeat the indelible force of contemporary art? Who funded this so-called art anyway? Could her hard-earned taxes have contributed to this? Wunderbaum has graciously invited Inez, en route to LA, to make her case in New York City. Designer Maarten van Otterdijk, along with actors and creators Walter Bart, Inez van Dam, Matijs Jansen, Maartje Remmers, Marleen Scholten and guest Daniel Frankl, bring her story to life. Join Live Arts for the New York City premiere of Looking for Paul, a genre-colliding work that questions art’s purpose, how it gets made and the international funding systems that support its existence, all through the lens of McCarthy’s controversial work.

Wunderbaum is a Dutch-Flemish actors’ group that makes theater about current issues, both on location and in the theater. Wunderbaum typically writes their own texts collectively, based on their own research, though every now and then they give instructions to authors who will write a text for them. They have performed shows in The Netherlands, United States, Iran, Scandinavia and Brazil. The group received the Mary Dresselhuys Award and VSCD Proscenium Award for their entire oeuvre, as well as the Total Theatre Award during the Edinburgh Festival Fringe 2014 for Looking for Paul.