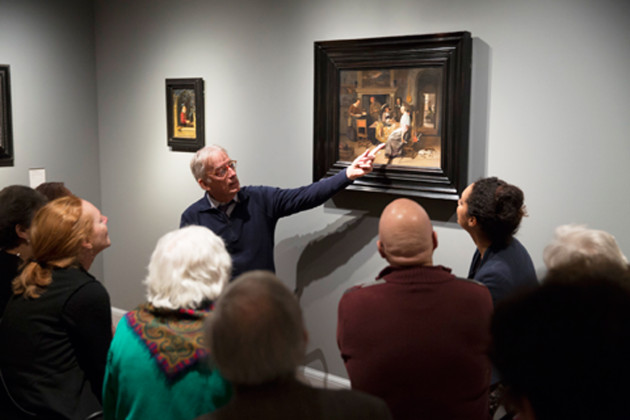 A recently established lecture series at the Yale University Art Gallery seeks to offer viewers an inside look at 17th century Dutch Art.

A recently established lecture series at the Yale University Art Gallery seeks to offer viewers an inside look at 17th century Dutch Art. The six-part series, entitled “A History of Dutch Paintings in Six Pictures,” began on Jan. 23 and consists of weekly lectures at the YUAG. Given by YUAG associate and former Director of Los Angeles’ Getty Museum John Walsh, the series offers insight into the golden age of Dutch artistry by focusing on a single painting each week. For each painting, Walsh delves into the artistic, sociopolitical and intellectual history that surrounds the work. Walsh said that the YUAG currently houses roughly 30 famous Dutch and Flemish paintings that are on loan from the private Rose-Marie and Eijk van Otterloo collection, which has spurred public enthusiasm in attending these lectures.

“Interest was stoked up quite a lot by the presence of these paintings in the gallery,” Walsh said. He noted that for the current series, he is employing a strategy of highlighting a single important work of art and then branching out to discuss works from the same era with similar themes. “This approach of going in depth into a single work of art is very productive,” Walsh said.

The six works the lectures focus on include paintings of historical scenes, landscapes and portraits. Walsh said that in each painting, he examines the artists’ intentions and the stylistic evolution of the featured genres. He aimed to discuss a number of famous paintings, as well as lesser-known works that viewers can see firsthand in the gallery.

Three of the six paintings are currently on display in the YUAG, and Walsh works with various YUAG guides to host “close-looking sessions” every Friday to offer viewers a tour of the paintings. According to Jessica Sacks, the Jan and Frederick Mayer senior associate curator of public education at the YUAG, the sessions help to clarify the way in which viewers understand and relate to the works. She noted that no matter how good a reproduced image is, there is a “striking difference” between a replica and an original work.

Walsh noted he that he was surprised at the attention the lectures have received, adding that he had underestimated the public interest in Dutch art. Judith Miller, an audience member at last Friday’s lecture, said that the lectures have taught her how to better understand a variety of paintings. She added that though she missed the first lecture, she plans to attend all of the others.

Walsh is Director Emeritus of the J. Paul Getty Museum in Los Angeles and a former paintings curator at the Metropolitan Museum of Art in New York.
For more information see Yale University Art Gallery.