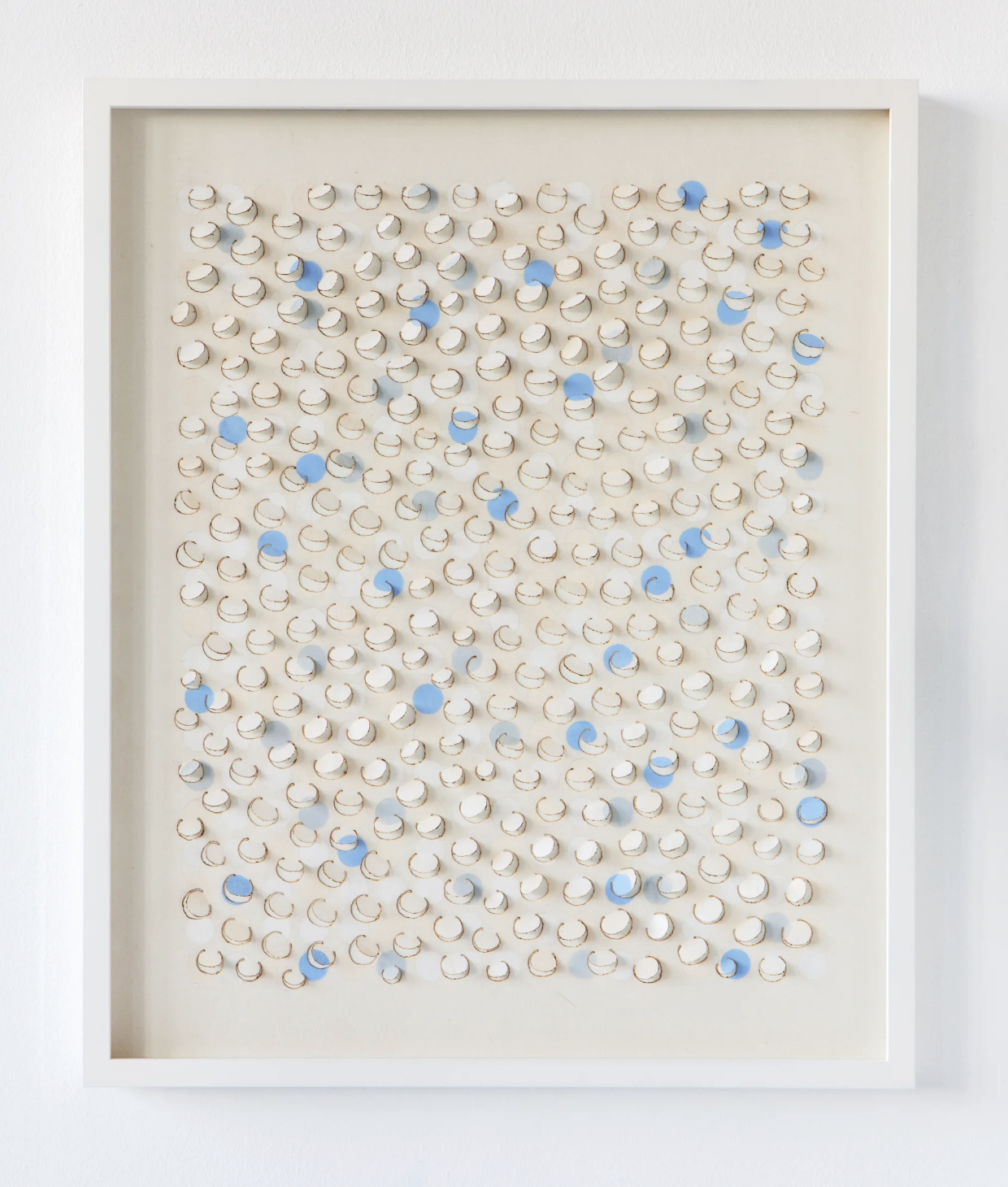 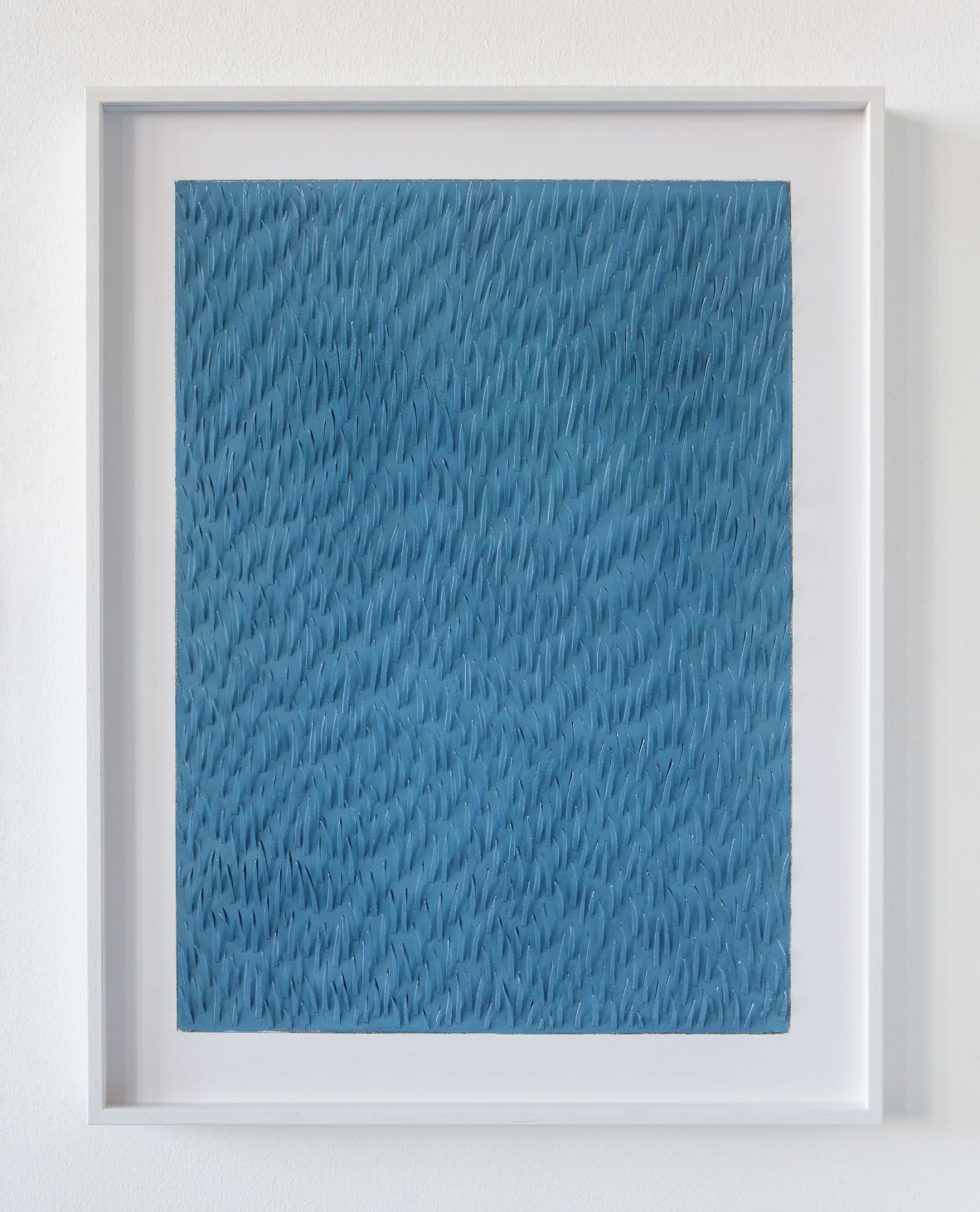 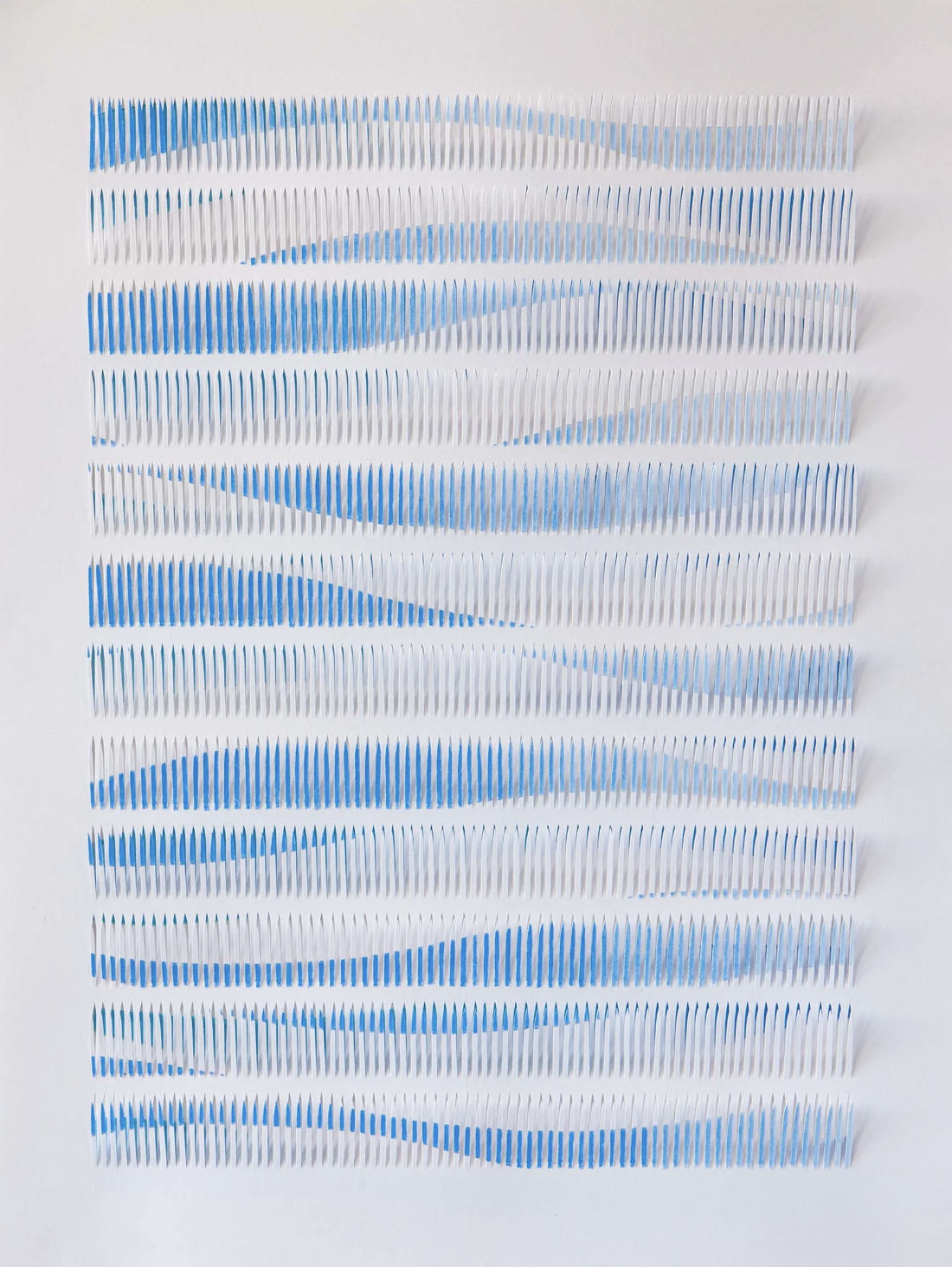 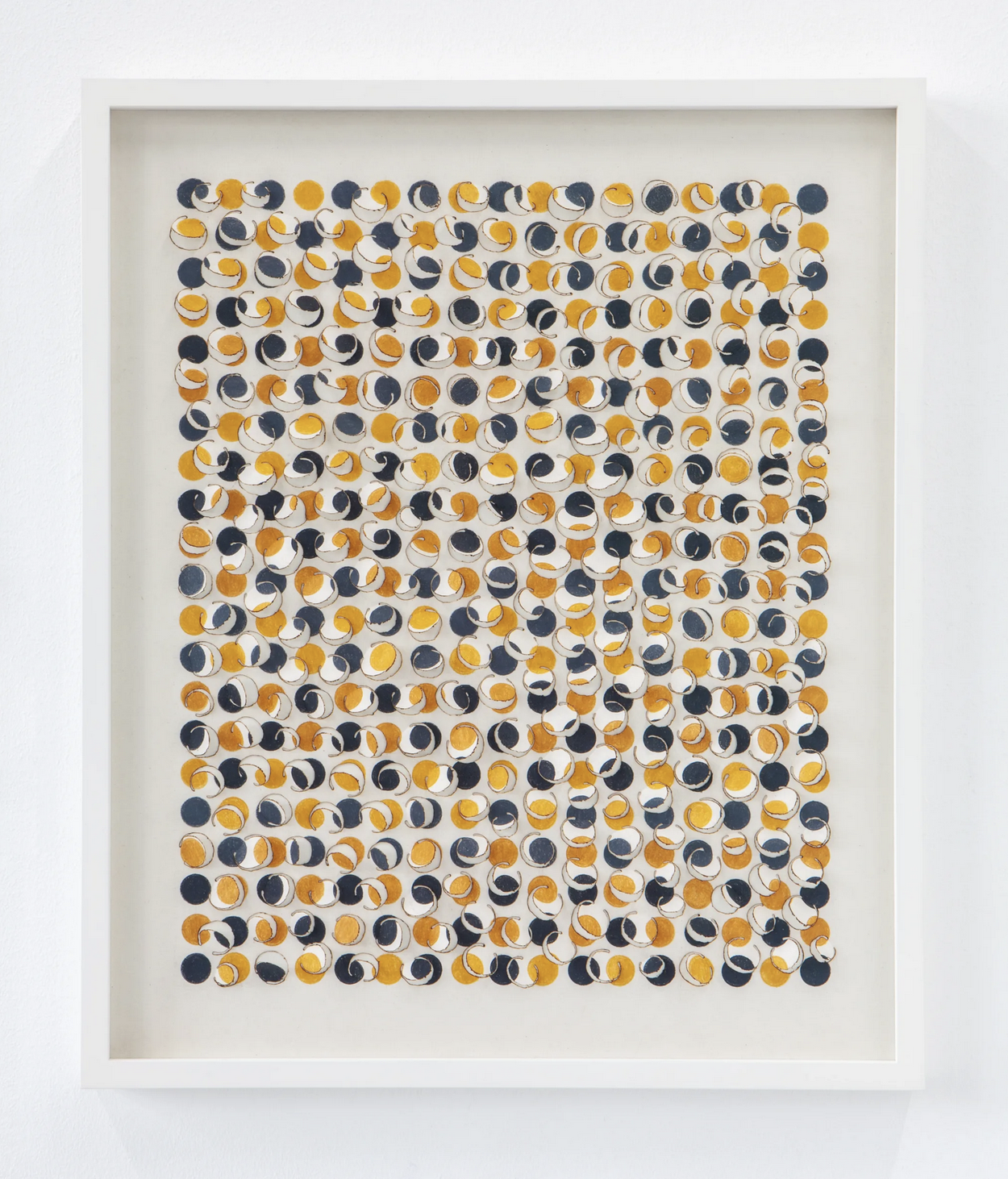 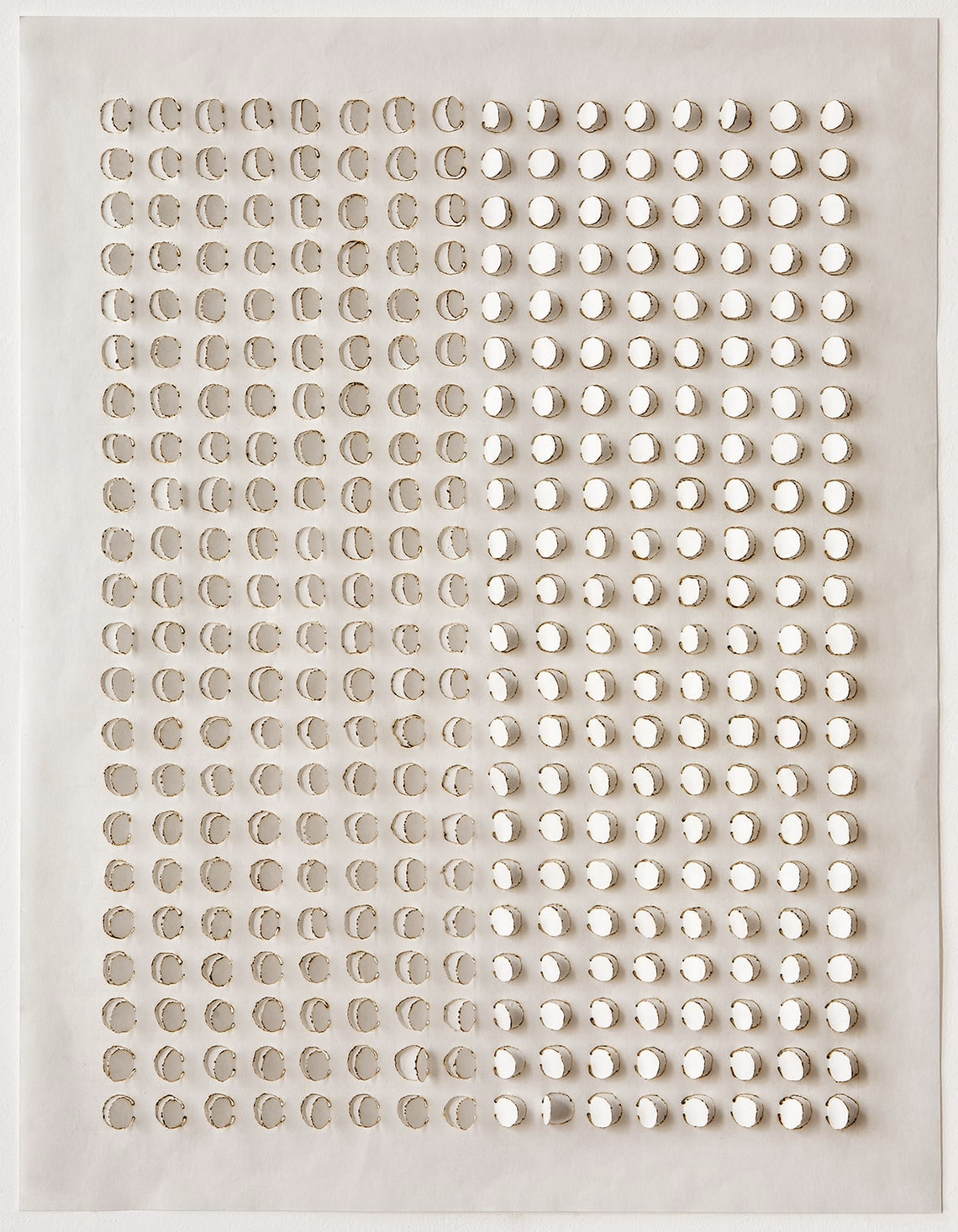 Municipal Bonds is delighted to announce Zaida Oenema‘s debut exhibition in the United States, A Clear Day, on view February 19–April 16, 2022. An opening is scheduled on Saturday, February 19, 12–5pm, and an artist reception is scheduled for: Saturday, March 5, 3–7pm.

The Dutch/Finnish artist’s work features abstractions of the natural world, cut and burned into reliefs on paper. Inspired by the environment’s temporal moments—moving shadows, rippling water, waving fields—Oenema’s work is a meditation on cultivating clarity, the resonance of quietude.

With a sensibility for distilling both mind and matter, Oenema tethers to monochrome and minimalism. Her approach appears as a concentrated structure, involving restrained color and reductive form. Based in The Hague, the Netherlands, Oenema explores a palette connected to the nearby North Sea coastline, in shades of blue and grey, pervasive white, warm yellow, and an occasional anchor of black. And her geometric shapes and patterns act as her own language, appearing in her work as familiar symbols derived from nature.

Using pen and pencil, scalpel and soldering iron, Oenema renders work on the border of two-dimensional and three-dimensional. With extreme eye-hand precision, she meticulously sculpts line and surface through the rhythmic action of incision and repetition. Working with recurrent forms—burned circles of suns, incised blades of grass, cut saw-tooth waves—her picture plane is at once orderly and dynamic. As such, the surface changes with the interplay of material, texture, and its response to light.

Oenema employs the grid as a foundational element of her work, for its formal restraint yet conversely for its inherent liberation, which allows for her free-hand drawing with blade and iron tip. Her technical rigor is less systematic or machine-like, more conductive and human. “I see my work not only as an abstraction, but as a kind of conversation or a musical score with a continuo, a harmonic structure, in it. The human hand provides the vibration to create its melody.”

Zaida Oenema (1980), is a Dutch/Finnish visual artist who lives and works in The Hague, the Netherlands. Oenema studied Nordic Arts and Crafts at Ålands Folkhögskola, Finland; earned a BFA in Photography at the Royal Academy of Art in The Hague (2004); and an MFA in Photography at St. Joost School of Art and Design in Breda (2009). In the past decade, she has moved from photography and video performance to drawing with various tools and materials including pencil and pen, scalpel and soldering iron, wood and resin.

Oenema exhibits her work regularly at galleries, fairs, and museums in the Netherlands: Galerie Helder, The Hague; Art Rotterdam with We Like Art; KunstRAI Amsterdam; Art on Paper Amsterdam; Papier Biënnale, Museum Rijswijk; and CODA Museum, Apeldoorn, among others. She has shown in Germany at Galerie Ursula Walter, Dresden; Projektraum Kunstquartier Bethanien, Berlin; and Art Fair Blooom, Cologne. Her work is held in many private and public collections, notably the permanent collection of VU University Medical Center, Amsterdam. Most recently, Oenema received a prestigious grant from the Mondriaan Fund for established artists to support her work for the next four years (2022-2025).